Today's Kerouaction
If you're reading this blog, you already know this passage from The Dharma Bums:

...see the whole thing is a world full of rucksack wanderers, Dharma Bums refusing to subscribe to the general demand that they consume production and therefore have to work for the privilege of consuming, all that crap they didn't really want anyway such as refrigerators, TV sets, cars, at least new fancy cars, certain hair oils and deodorants and general junk you finally always see a week later in the garbage anyway....

And you know Jack traveled a lot with everything he needed in a rucksack.

What kind of rucksack would Kerouac use?

Well, that's an easy one. Here's a picture of his actual rucksack: 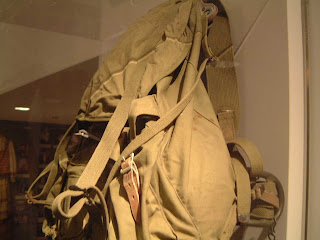 Your task: get a rucksack like Jack's. It's gotta be canvas. It's gotta look beat. But where? Goodwill or the Salvation Army or any local used goods store, of course. Or maybe a military surplus store. Or a Boy Scout supply store?

If you want to spend your hard-earned greenbacks, Duluth makes The Wanderer. 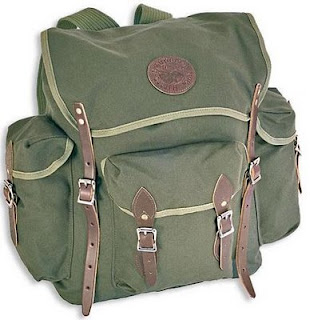 But it just doesn't fit the bill visually. But how about the Kakadu? 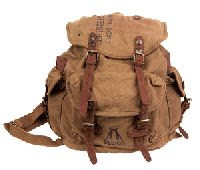 Get over to the Outdoor Wares website and order one today! Be like Jack. Get a rucksack!
Posted by Rick Dale, author of The Beat Handbook at 9:27 AM

Email ThisBlogThis!Share to TwitterShare to FacebookShare to Pinterest
Labels: rucksacks