Today's Kerouaction
We'll wrap up Jack Kerouac Month (proclaimed as such in this blog March 1, 2009) with an entry on compassion. Personally, I think Jack was a compassionate human being. I think perhaps to a fault. He saw the suffering in the world, wrote about it, suffered himself, and ultimately couldn't deal with all the suffering of sentient beings, including himself, on the planet. Turning to drink was his way of dealing, and it killed him.

In Jack's introduction to Lonesome Traveler, he says:

Am known as "madman bum and angel" with "naked endless head" of "prose."

Now that is the phrase from Lonesome Traveler that many are familiar with. It's inscribed on one of the pillars in Kerouac Park in Lowell. But the passage goes on and Jack says:

Always considered writing my duty on earth. Also the preachment of universal kindness, which hysterical critics have failed to notice beneath frenetic activity of my true-story novels about the "beat" generation.

When I was in Lowell, MA for Lowell Celebrates Kerouac! 2008, I met a man named Phil who knew Jack. 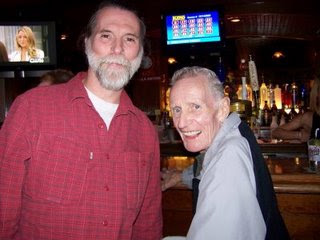 He told me that when he knew Jack, he wasn't aware that he was a famous writer. I asked him what he remembered most about him, and this is what he said:

"He was nice to the shoeshine boys."

Your Kerouaction for this last day of Jack Kerouac Month: Show compassion to all sentient beings on the planet.

Thanks for running a Jack Kerouac month on your great blog/site. Lots of fine articles in the month of Jack's birthday. I enjoyed reading them. Please excuse the advert which appears below for a couple of internet threads/groups you can join if you wish to exchange views and information on Kerouac and the Beats:

All best, (and thanks again)