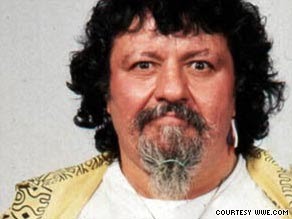 Flamboyant - and legendary - professional wrestling manager (and wrestler) "Captain" Lou Albano died yesterday at age 76 in NYC. He was known to the world outside of professional wrestling for a role he played in the Cyndi Lauper video "Girls Just Want to Have Fun." The Captain was in his heyday when my son, Jason, was very young and we used to watch pro wrestling just as I did growing up when the big attraction was Championship Wrestling with Johnny Powers on Saturday afternoon (along with Monster Movie Matinee where we saw all the great B horror movies like Them and The Day the Earth Stood Still and The Creature from the Black Lagoon and The Thing from Another World where Scotty concluded with "Watch the skies, everywhere! Keep looking. Keep watching the skies!," etc.). Here's the CNN article on Lou: Lou Albano dies at 76.

So what's the Kerouac connection? Well, it turns out that Jack's dad, Leo, managed some semi-pro wrestlers according to author Barry Miles in Jack Kerouac: King of the Beats:

Leo did well in Lowell. He left L'Etoile to set up his own print shop, Spotlight Print, where, in addition to handbills and other such work, he published his own little newspaper, the Spotlight, which featured his own reviews of local theatrical productions. He was a well-known figure in the town though not necessarily well-liked: muscular, short, stocky, overweight, loud, verbose, opinionated, bigoted, leaving a trail of cigar smoke behind him as he stamped from place to place. He was a sporting man who followed the horses and managed a few semi-pro wrestlers and boxers, promoting the occasional fight. He was a classic small-town personality. A big fish in a small pond.

It's fun to be alive.
Posted by Rick Dale, author of The Beat Handbook at 8:53 AM