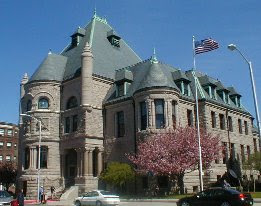 Picking up where we left off yesterday, on Friday we left the gravesite and headed to our hotel, the Radisson in Chelmsford. We ate in the hotel bar, The Independence Grille, and then we made our way via taxi for a tour of the Pollard Memorial Library, where Jack used to hang out when he skipped school. This building is simply breath-taking, and we were so mesmerized that we forgot to take pictures (the above is courtesy of the Internet).

This building cost only $174,000 new in 1889, yet renovations in recent years cost over $8 million! Inflation! A highlight was seeing the three large hanging murals of the Civil War (the building was originally a memorial to fallen soldiers as well as a library), reminiscent of the paintings in the Cyclorama at Gettysburg. There's a display of Jack's books and even a picture of his library card. Like I say in The Beat Handbook, you can learn a lot in your library, probably a hell of a lot more than in school. Jack is proof of that. Bill Walsh is a storehouse of Lowell history, and, accompanied by Roger Brunelle, made the library tour a highlight of the weekend.

From there, we headed into the heart of Lowell to the Village Smokehouse to hear Tex McNamara & the Bucking Broncos. We had a couple of margaritas and enjoyed the music and bought a pub crawl T-Shirt from Mike Wurm who led the pub crawl we missed the night before and bought Kerri an LCK T-shirt (already bought one at the library but they didn't have her size there) and talked with Roger and saw Charlie and Chris from the gravesite and finally had to taxi back out to Chelmsford before we got too tired to get up for the next day's events.