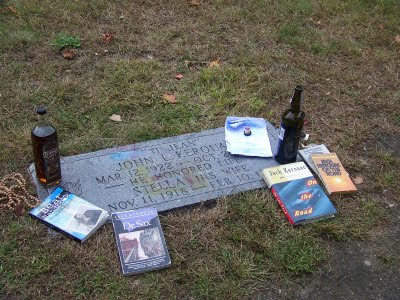 I'm going to be posting about our Lowell Celebrates Kerouac weekend in parts in order to save you from some serious scrolling.

This was our second year at LCK and my fourth trip to Lowell, having stopped there on the way to Maine to visit Crystal (when we were long-distance dating) in December 2005 and again on a trip we made to Pennsylvania in 2007. My first trip to Lowell was to visit Jack's grave (and his memorial: Kerouac Park). During that trip, I met a couple at the grave - on their honeymoon - and the young man said he was a writer and that if he ever published a book he was going to leave a copy on Jack's grave. That gave me the idea to leave a copy of The Beat Handbook on Jack's grave, which I did during last year's LCK October event (see At Jack's grave 2008). I left a copy and it mysteriously turned up at this year's LCK! But more on that later.

Last year, Crystal and I were alone at the grave. This year when we arrived, two men were making charcoal rubbings of the gravestone. They turned out to be a couple of cool Kerouac fans from Michigan, Charlie and Chris, who were on a pilgrimage to Lowell. Here's a picture (faithful readers of my blog have already seen them in the video we shot of me reading from Dr. Sax): 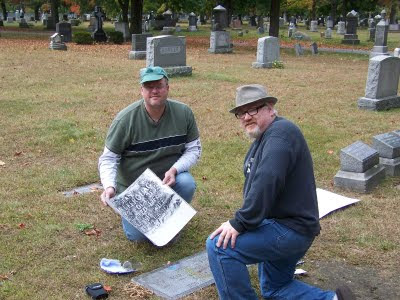 Charlie and Chris gave us a rubbing, and it's sitting on the kitchen table right now, awaiting its fate (office or home? framed or just thumbtacked?).

Charlie and Chris were drinking Dow's port, and Crystal and I were drinking 16-year-old single malt Bushmills purchased on the way from a New Hamsphire liquor store. A small amount of each was dutifully poured on the ground in front of the gravestone. 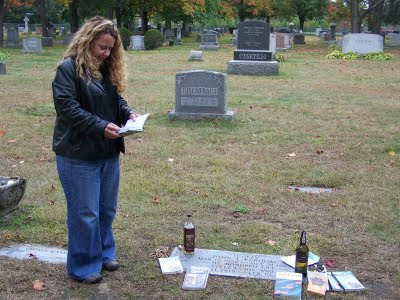 Then Steve from Ohio with his friend Barbara from New Hampshire arrived. Here's a pic of Steve: 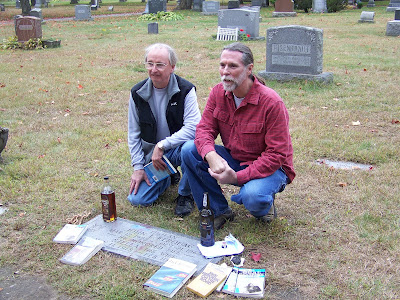 Corey from New Hampshire soon-to-be-Boston showed up as well, but we didn't get her pic. So that was 5 states represented if you count where Corey was fixing to move: ME, OH, NH, MA, and MI.

Charlie, Chris, and Steve all bought copies of The Beat Handbook, for which I am truly grateful. And, of course, I left a copy on the gravestone, just like last year. Maybe it will find its way into the hands of someone who will write in it and pass it on like Anestis did with last year's copy, but I'm getting ahead of myself.

Part 2 tomorrow.
Posted by Rick Dale, author of The Beat Handbook at 6:06 PM