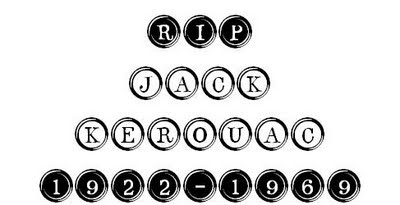 Jack Kerouac died October 21, 1969 in St. Petersburg, FL at St. Anthony's Hospital. Dr. Kerouac (he was awarded an honorary Doctor of Letters posthumously by UMass Lowell in June 2007) was only 47 years old (synchronistically, on may way to campus this morning I saw, for the first time in memory, a casket company vehicle - it said "Matthews International Casket Division" on the side).

What were you doing on October 21, 1969? It was a Tuesday, so I would have gotten up first thing - did I take daily showers then? - and walked up the hill to the Wellsboro Junior High School where I attended 9th grade (yes, 9th grade wasn't considered high school then). I don't remember my 9th grade teachers, but they may have been some combination of Ms. Millier (who we all had the hots for), Mr. Griscavage, Mr. Schwab, Mr. Daugherty, Mr. Cruttenden, Mr. Mills, Mrs. Davis, etc. We were past Miss Snyder's - "bless her gizzard" - obtuse geography classes (thankfully) and Mrs. Siemens' Latin classes (helpful on the MAT). I think the principal was Mr. Deibert – it always scared me just to look at him. I was probably in the beginning stages of a wicked unrequited crush on Cindy that lasted a while into my high school years (note to self - read Maggie Cassidy). My group of friends was changing as I became more confident academically. And, of course, I had my share of teen angst. I could be wrong about any of the above “facts.” They called Jack Kerouac "memory babe," but I fall way short on that score.

After school I would have walked back down the hill - perhaps lingering just off school grounds for the daily fight between two testosterone-influenced brutes - and probably hung out in the hotel (where we lived) until dinner in the formal dining room with mom and dad (after a cocktail in the bar – them, not me). I would have excused myself early, allowing my parents some alone time, and maybe that was one of the nights I snuck over to Gus' Candy Kitchen and bought a 25-cent bag of Jax Cheese Curls to bring back and eat while watching a new episode of Jonny Quest.

In any case, I was 13 years old and wrapped up in my own adolescent trivialities while Jack Kerouac - literary giant - was dying in a Florida hospital (murdered, actually, but that is another subject on which I’ve written previously). I was a long time from learning about Jack, but he was already inside me in some sort of weird osmotic way I can't yet explain. Maybe it was all the beat characters who worked at or stayed in the hotel (Mr. Rifkin, until this moment I hadn't thought of you in years - damn, were you beat!).

Jack, we miss your spirit. I’ll lift one to you later tonight.

Rest well….
Posted by Rick Dale, author of The Beat Handbook at 8:53 AM

a sad day. thanks for the reminisce.

in 1969 my dad would have been about my age now but suffice it to say the news would have passed him unnoticed. he'd never read nor heard of kerouac, then or now. a few years back when i read 'on the road' for the first time on a cross country road trip we took he would eye the book suspiciously when i brought it to breakfast. i think he was jealous. i suppose he had a right to be.

Wow! My dad would have been 65. And I doubt he would have noticed, either. Ti Jean, we hardly knew ye....