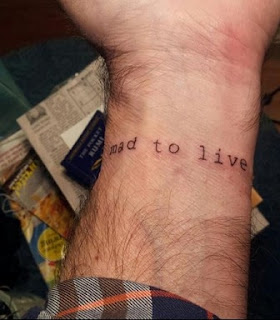 Finally got that new Kerouac tat I mentioned previously (at least I think I mentioned it).

It works on a few different levels.

I expected it to hurt more than my others, but it hurt less.

I had it done at One of a Kind Tattoos in Farmington by a UMF psychology (hold the jokes) grad, Jeremiah.


Posted by Rick Dale, author of The Beat Handbook at 9:38 PM

Cool! I'm getting "the road is life" later this year, probably on my inside left upper arm. He'll join Ginsberg, Burroughs, and Hunter Thompson - so it's good Beat company.