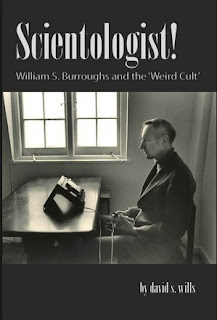 In Scientologist! William S. Burroughs and the 'Weird Cult,' David S. Wills, founder and editor of Beatdom, traces Burroughs' involvement with Scientology from his early introduction to Dianetics in the late 1950s and continuing throughout his life. Beginning with a general biography of Burroughs' early years, detailing some of the trauma that caused him the psychological scars that made him susceptible to L. Ron Hubbard's teachings, Wills exhaustively mines other Burroughs biographies and Burroughs' own writing (novels, published and unpublished letters and essays including material in the Berg Collection) to uncover in detail the significant influence Scientology had on Burroughs.


He [Burroughs] was a deeply scarred human being with a mind full of awful memories and what he perceived to be handicaps  - his homosexuality and drug addictions. He had sought to fix his problems through therapy, yet evidently Scientology was a quicker and more effective fix. As intelligent as Burroughs was, he was nonetheless fragile, and as wary as he was of being a "mark," he was so desperate to find a cure for his pains that he would have walked into any trap set just for him. And looking back at his history of beliefs, and his long line of particular problems, no trap was as custom-made for this man as the Church of Scientology.

Wills details and makes connections between Scientology and Burroughs' interest in Hassan ibn Sabbah, the Mayans, Wilhelm Reich's orgone energy theory, and other bizarre beliefs which Burroughs loved to say were "scientific" but was hard-pressed to provide evidence supporting his claims. According to Wills, even Burroughs' Cut-up Method is tied "quite explicitly to Scientology," citing a letter from Burroughs to Allen Ginsberg (p. 64).

Burroughs comes across in Wills' book as the conflicted man he obviously was, and he waffled back-and-forth between being a true believer in Scientology (having reached the stage of Clear) and being L. Ron Hubbards' nemesis, getting into written scuffles with the latter or his supporters in published essays. From astral projection to time travel to immortality in space, Burroughs believed in all sorts of fringe science notions and other oddball theories, but through it all remained a prolific writer and an iconic figure who far outlasted his Beat Generation credentials. Also throughout most of his life he maintained that certain aspects of Scientology had great merit (e.g., the E-meter, the reactive mind, exteriorization, and silence).

Wills makes a good case for his thesis, and it's an interesting read throughout. Never having been a big Burroughs fan - I barely slogged through Junky - the fact that I read this 209-page hyper-focused treatise over the course of three days is a testament to Will's clear and engaging style as well as his presentation of interesting content. My one criticism is how Wills cites his resources, using notes as the end of the book with no references within the text, making it a bit hard for the reader to identify what resources he used for specific claims. Even a simple numbering scheme like MLA Style would help immensely.

If you're a William S. Burroughs or a Beat Generation fan, this is a must-read. Others may find something of interest here as well, as Wills obviously has a passion for the topic and it comes through in his writing.

Personally, I never knew just how bizarre Burroughs' was (or why), but now I have a new appreciation for his travails. I was also a bit clueless as to how prolific a writer Burroughs was, and I have a whole new list of books to read. As if I needed more.

Wills' book was published by Beatdom Books and is available on Amazon in both paperback and e-book versions.
Posted by Rick Dale, author of The Beat Handbook at 4:38 PM