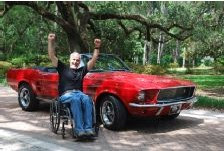 According to Mustang Monthly,


in mid-September, military historian and author Bruce Gamble will be taking his restored and modernized ’67 Mustang convertible on a 6,000-mile trip across America and back to commemorate the 65th anniversary of a hitchhiking and bus trek made by Jack Kerouac, which formed the basis of his classic novel On the Road.

Gamble, a paralyzed Navy veteran, will trace Kerouac’s entire route from New York City to San Francisco, then down to Los Angeles and eventually back to New York via the Southwest.

Along the way, he will publish a series of essays on his blog site, www.mysweetchariot.wordpress.com.


I'm impressed with this plan, and think it would be cool to keep track of Bruce's travels by reading his blog and give him some words of encouragement along the way.

Click here for the original article, but be warned, an annoying ad will pop up and you will not be able to get rid of it easily.
Posted by Rick Dale, author of The Beat Handbook at 10:02 PM