Did Gore Vidal and Jack Kerouac hook up?

By now you've likely read that author and bon vivant Gore Vidal has died at the age of 86. We are interested in this beyond a passing Donne-ish fancy, because Vidal has long-claimed to have had sex with our hero, Jack Kerouac, and we wonder if it's true.

Stories vary depending on the source. At DHARMA beat you'll see this: 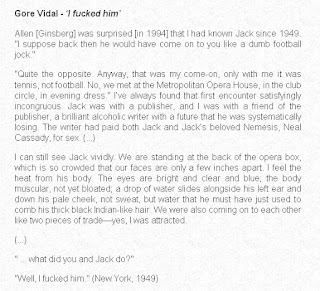 Quite a bit more detail is provided at The Last Bohemians blog (click here).

According to the Character Key To The Duluoz Legend compiled by Dave Moore, Vidal did have an "infamous one-night liaison with Kerouac in the Chelsea Hotel, New York, summer 1953." This gibes with The Last Bohemians description. Also, according to Moore, Vidal was portrayed in Jack's The Subterraneans as Arial Lavalina. Other on-line character keys confirm this.

According to Gerald Nicosia's Memory Babe (1994, University of California Press), "Jack proved impotent" that night in the Chelsea hotel (p. 444). So, it's hard to pin this down with certainty, but it looks to me like something happened. Not that there's anything wrong with that,* of course. It's no secret that Jack swung both ways sexually. We were just exploring the topic given Vidal's death . . .

. . . because, you know, around here everything connects back to Kerouac. Everything.


Posted by Rick Dale, author of The Beat Handbook at 2:40 PM