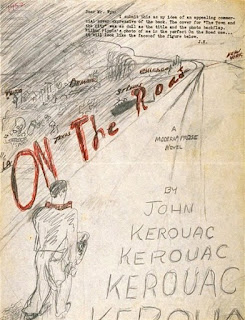 Click here for an example of what passes as Jack Kerouac "news" according to Google. I suppose everything old is new again when enough time passes, as I posted about this aspect of Jack a year ago (click here) and it was old news then. But I get it. Now every "news" source can rehash old Kerouac information by connecting it to the film version of On The Road. And maybe that's not a bad thing, especially if it helps create more authentic Kerouac fans.

Maybe I just need to learn how to capitalize and thus increase my blog traffic and book sales. I know. Here's some Kerouac news: I'm taking my two cats to the vet tomorrow. Jack Kerouac loved cats, and a film version of his book, On The Road, starring Kristen Stewart is going to be released in the U.S. on December 21.

Put that in your list of Kerouac news hits, Google.
Posted by Rick Dale, author of The Beat Handbook at 8:54 PM