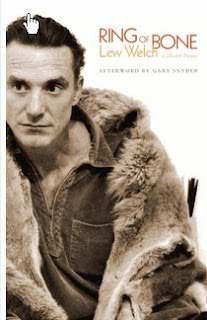 As mentioned on June 7, 2012, I received a review copy of Lew Welch's Ring of Bone: Collected Poems and I just finished it. Before I get into the book itself, some context is in order.

First of all, do not confuse this with the 1979 edition of the same title, which was published not long after Lew "left his car and his camp and his plan, and walked off [from Gary Snyder's house] into the wilds of the northern Sierra" (p. 13), never to be heard from again (or found). This is a new (2012) edition from City Lights Books with a preface by Gary Snyder (Japhy Ryder in The Dharma Bums).

Second, this book is of interest not only because of its own merits (which I'll get to below), but also because Lew Welch was one of Jack Kerouac's contemporaries, appearing as Dave Wain in Big Sur. Lew was Jack's chauffeur back-and-forth to Lawrence Ferlinghetti's cabin at Big Sur in 1960. Prior to that, in 1959, Welch took a cross-country drive with Kerouac and Albert Saijo (George Baso in Big Sur) that resulted in a "book of 'road-trip haiku' titled Trip Trap (1973)" (from Dave Moore's Character Key to Kerouac's Duluoz Legend at http://www.beatbookcovers.com/kercomp/index.htm). Welch was one of a group of 4 poets at Reed College in the 40s, two you've definitely heard of - Philip Whalen and Gary Snyder - and one you may not have - William Dickey. Whalen, Snyder, and Welch "re-grouped in the Bay Area in the late fifties and participated in the San Francisco Renaissance/Beat literary scene" (p. 13). That is the context in which Welch met Jack Kerouac.

Finally, you may know Lenore Kandel, a well-known beat poet, who had been Welch's girlfriend and was immortalized by Kerouac in Big Sur as Romana Swartz. Welch had a common-law wife, Madga Cregg, who had a son from a previous marriage named Hugh Anthony Cregg III. You probably know him by his musician stage name, Huey Lewis (and the News). Book I in Ring of Bone starts, "THIS BOOK IS FOR MAGDA" (p. 23).

Enough biography and on to Ring of Bone. I want to start by saying that I really love Lew Welch's poetry. According to Welch's preface, it is "a spiritual autobiography arranged in more or less chronological sequence" (p. 17). But Ring of Bone is not as Welch left the manuscript in 1970 when it was accepted by a New York publisher. Welch "walked away" in 1971 and left a farewell note naming Donald Allen as literary executor, directing him to use not only the assembled Ring of Bone but all of his papers as well. After a careful study, Allen added a number of poems in a section titled, "Uncollected Poems," and also the fantastic "A STATEMENT OF POETICS" at the end, a prose piece by Welch that was the beginning of a textbook for a course in poetry. The latter was a highlight for me as it gave important insights into how Welch thought about poetry. Reading that piece gave me a better appreciation of what Welch was trying to do in his poems, and it also made me wish I could have known him (or taken his poetry course).

For example, he tells the story of stopping at a California winery to get free wine from the tasting room (a beat thing to do!), and a tour was starting so he decided to go along. The young tour guide was going on and on in the familiar monotone that we're all boringly familiar with, and then said, "Whose kid is that?"

The force of whose kid is that caused everyone to pay attention to the real moment we were all in. A small child was about to fall into a very deep vat of wine.

I vowed, at that moment, that every statement in my poems should have at least the force of whose kid is that.

It is an impossible standard, but a good one. Few really bad lines can stand against it (p. 242).


It may be an impossible standard, but Welch succeeds more often than not. One of my favorites is "OUR LADY OF REFUSED LOVE" (p. 223) about Margaret, whose mind, while she was sipping brandy or stitching after dinner

would drift on back through
all of Life and Time

since our cells slid mindlessly
in hot


After a section wherein Margaret envisions all of evolution, the poem concludes:

until attention fixed at last upon the complicated
liquor
the needlework
her fingers, hands, her thighs her
walls


I'd love for you to read the entire poem and how it describes what transpired before her inner eye, but I might fun afoul of the copyright police. The solution is for you to order your own copy of Ring of Bone from City Lights Books by clicking here.

Once you get it in your hands, you will read poems that not only meet Welch's whose kid is that standard but also serve as examples of why we prize poetry. As Welch puts it,


Sounds like Kerouac, doesn't it? Welch's poetry definitely strikes one as spontaneous, and thus an exact transmission of "Mind into Word," but don't be fooled (as you shouldn't be by Jack's poetry) into thinking that Welch didn't spend time editing and re-writing. There is too much craft in his poetry to think such a thing.  Welch's poems ring true to our own experiences with a rare clarity amidst their jazz phrasings and spontaneous feel.

There are short prose pieces mixed in with the poetry, like "SMALL SENTENCE TO DRIVE YOURSELF SANE," in which he advises that the next time you're doing something absolutely ordinary, or better, absolutely necessary, say to yourself, "So it's all come to this!"

Ring of Bone is filled with outstanding poems, so much so that I hestitate to keep picking out favorites. I was enamored of "NOTES FROM A PIONEER ON A SPECK IN SPACE" (p. 77). I love how it starts out with advice to someone unfamiliar with our planet and ends with the poet and his wife picking up shells and stones and other curiosities from the beach:

She was all excited by a slender white stone which"
"Exactly fits my hand!"

I couldn't share her wonder;
Here, almost everything does.

Of course, there are references to Kerouac, too, which only increases my affection for Welch's work. In "LEO GIVES HIMSELF YET ANOTHER NAME," he quotes Jack: "'I'm the Buddha known as the quitter'" (p. 206). And there's "I SOMETIMES TALK TO KEROUAC WHEN I DRIVE":


I give Ring of Bone my strongest recommendation. Get a copy and delve into Lew Welch's mind, wonder along with him at our human experience, and have your attention repeatedly focused like a laser.

Whose kid is that?
Posted by Rick Dale, author of The Beat Handbook at 11:37 AM