Curation #135 from my Kerouac bookshelf: Kaddish and Other Poems 1958-1960 by Allen Ginsberg 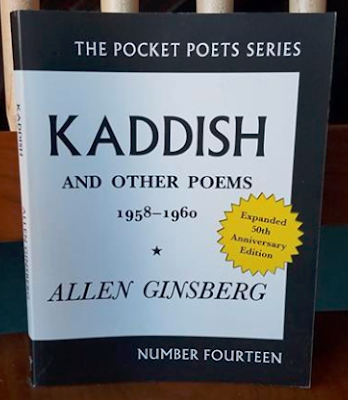 Item #135 in my Kerouac bookshelf curation project is this softcover 2010 City Lights Books (no printing number) edition of Kaddish and Other Poems 1958-1960 by Allen Ginsberg.130 pages, it measures about 4-7/8" x 6-1/4" and is in very good condition. I don't remember the provenance. It may have been a review copy sent to me by the publisher given the publicity sheet I found tucked in the back.

Originally published in 1961, this is the expanded 50th anniversary edition, which includes "Kaddish" plus 15 other poems, an afterword by noted Ginsberg biographer Bill Morgan, previously unpublished family photographs, Naomi's paintings, and Ginsberg's essay, "How Kaddish Happened" (liner notes for his Atlantic Records recording of the poem).

If you haven't read, "Kaddish," Ginsberg's "other" long poem (perhaps the most famous being "Howl" -- to be curated tomorrow -- given its obscenity trial), click here for an on-line version. Scholars differ on which of the two is his best work. "Kaddish" means a Jewish prayer recited by mourners, and this poem is Ginsberg's elegy to his mother, Naomi. The other 15 poems are classic Ginsberg. As you would expect, Morgan's afterword is well-written and instructive.

When one thinks of Beat poets, Ginsberg usually tops the list, making this book a natural for any Kerouac bookshelf.

Below is a picture of Shelf #5 (last one!) of my Kerouac bookshelf showing the placement of this book (first book on the left) on the day I started curating my collection. Next up: Howl and Other Poems by Allen Ginsberg (tucked and hidden between Kaddish and Women).


Posted by Rick Dale, author of The Beat Handbook at 10:04 AM