Curation #139 from my Kerouac bookshelf: The Beat Face of God: The Beat Generation Writers as Spirit Guides by Stephen D. Edington 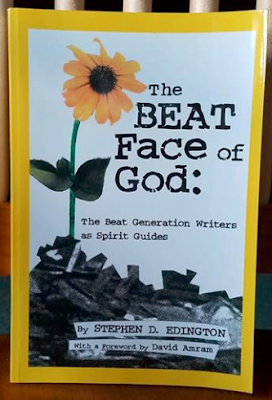 Item #139 in my Kerouac bookshelf curation project is this softcover 2005 Trafford Publishing first edition 6th printing of The Beat Face of God: The Beat Generation Writers as Spirit Guides by Stephen D. Edington. 146 pages, it measures about 6" x 9" and is in very good condition. The provenance is a little vague, but I think I got it directly from the author since he inscribed it as follows:


Author Steve Edington is well-known in the Kerouac world from his long-time membership on the Lowell Celebrates Kerouac Committee, the group that puts on the fantastic yearly festival in October (and activities in March around Jack's birthday). If memory serves, Steve is a past president of that committee. He is always a visible face at the festival, working behind-the-scenes as well as out front to bring the festival to fruition year after year. As a Unitarian minister, Steve is well-versed in the religious side of things, and he brings that knowledge to bear in this exploration of the intersection between the Beat Generation writers and living the spiritual life. His thesis is summarized on p. 9:


In the chapters that follow it is my intent to treat--drawing on both their lives and their writings--the Beat Generation writers as the authors of the gospel of an alternative spirituality and alternative religion of the 1950s.


True Beat Generation fans and scholars understand that Kerouac considered himself a religious writer, and Steve's book lends credence to that notion, thereby earning a spot on my Kerouac bookshelf.


Below is a picture of Shelf #5 (last one!) of my Kerouac bookshelf showing the placement of this book (4th from the left) on the day I started curating my collection. Next up: One Flew Over the Cuckoo's Nest by Ken Kesey.

Posted by Rick Dale, author of The Beat Handbook at 9:23 AM