Curation #150 from my Kerouac bookshelf: A Casebook on the Beat edited by Thomas Parkinson 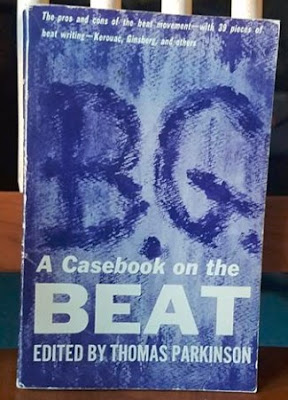 Item #150 in my Kerouac bookshelf curation project is this softcover 1961 Thomas Y. Crowell Company (no printing number) second edition of A Casebook on the Beat edited by Thomas Parkinson. 326 pages, it measures about 5-3/8" x 8-1/4" and is in fair condition. The provenance is uncertain.

This is one of a series of "Crowell Literary Casebooks" under the general editorship of William Van O'Connor, others being about such topics as Ezra Pound, Henry James' "The Turn of the Screw," and Dylan Thomas. The aim of this book, according to Parkinson's preface, is to "present a body of material essential to understanding the writing often placed under the rubric "Beat Generation" or more simply "beat."

To accomplish this, Parkinson has assembled writings (fiction, poetry, and commentary) from Allen Ginsberg, Jack Kerouac, Gregory Corso, William S. Burroughs, Lawrence Ferlinghetti, Gary Snyder, Philip Whalen, Michael McClure, and John Weiners. In addition, there are 12 pieces of commentary by notables from Kenneth Rexroth to Norman Podhoretz to Henry Miller to Lawrence Lipton. This volume concludes with a bibliography and a set of "Suggested Problems," the latter being suitable for inquiry if one were teaching a class on the Beats.

One could argue with Parkinson's editorial choices (e.g., I don't think you'll find John Weiners mentioned in too many lists of Beat writers), but this is a useful compendium of both Beat writing and commentary about the Beats. As such, I would expect to see it on any Kerouac bookshelf worth its salt.


Below is a link to Amazon where you can buy this book, but it is available much cheaper at AbeBooks.com and other outlets (try using BookFinder.com).

Below is a picture of Shelf #5 (last one!) of my Kerouac bookshelf showing the placement of this book (4th from the top of the pile) on the day I started curating my collection. Next up: You Can't Win by Jack Black.

Posted by Rick Dale, author of The Beat Handbook at 10:42 AM