Curation #137 from my Kerouac bookshelf: Women by Charles Bukowski 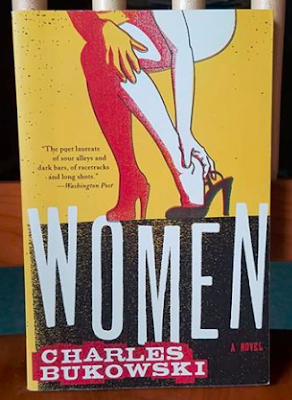 Item #137 in my Kerouac bookshelf curation project is this 2002 Ecco 12th printing of Women by Charles Bukowski. 291 pages, it measures about 5-1/4" x 8" and is in very good condition. The provenance is likely that I acquired it via Amazon.

Given that he certainly was not a Beat writer, why is a Bukowski book on my Kerouac bookshelf? Simple. Acclaimed Kerouac biographer Gerry Nicosia recommended it to me, and that gave me enough of a connection to put it among my other Kerouac and Kerouac-related items.

Originally published in 1978, Women is a semi-autobiographical fiction novel about dozens of meaningless sexual encounters and excessive drinking. The narrator, Henry Chinaski, is a writer who travels to do readings and so some of the sex and drinking takes place in that context. I didn't love this book, but it is Bukowski and thus there is a certain engaging, straightforwardness to the writing which is appealing. It is hard to care much about the narrator, who is an unabashed womanizer and drunk. While I could relate to his sexual exploits as a man from a purely physical point of view, the narrator's objectification of women diminishes or actually eliminates the potential titillating aspects of his encounters.

The only line I see that I underlined in the whole book is on page 177: "People had to find things to do while waiting to die." Reminds me of Townes van Zandt's song, "Waiting Around to Die." I've read that when asked why he wrote so many sad songs, Townes said he didn't write sad songs -- he wrote hopeless songs. Chinaski is certainly that, but maybe hopelessness is the kindling for Buk's writing abilities.

There is no real reason why this book should be on your Kerouac bookshelf unless you have a reason like I do as stated above.

Below is a picture of Shelf #5 (last one!) of my Kerouac bookshelf showing the placement of this book (2nd from the left) on the day I started curating my collection. Next up: The Iron Heel by Jack London.

Posted by Rick Dale, author of The Beat Handbook at 9:44 AM