Curation #143 from my Kerouac bookshelf: A Life of Herbert Huncke, American Hipster: The Times Square Hustle Who Inspired the Beat Movement by Hilary Holladay 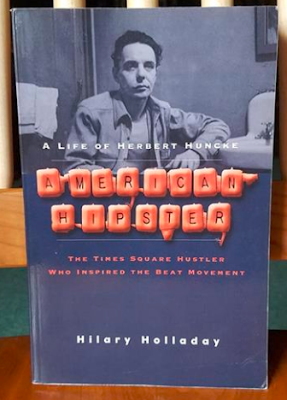 Item #143 in my Kerouac bookshelf curation project is this softcover 2013 Magnus Books (no printing number) edition of A Life of Herbert Huncke, American Hipster: The Times Square Hustler Who Inspired the Beat Movement. There's no comma in the title -- I put that there for lack of a better option. The cover title appears exactly the same way on the title page. I suppose I could use two colons, but that looks weird to me, as does running the first two lines together without punctuation. There's probably a right way but I am not going to lose sleep over it. 374 pages, this copy measures about 5-1/4" x 8-1/8" and is in very good condition. I have forgotten the provenance but it likely came from Amazon.

Herbert Huncke was a significant figure among the Beat Generation writers but gets much less written about him than the core triumvirate of Kerouac, Ginsberg, and Burroughs (not to mention Lucien Carr and his too-often unsung role). Hence, this biography is a significant contribution to the story of the Beats. Author Holladay, a Ph.D., is an American literature scholar with several books to her credit and has taught at James Madison University and UMass Lowell. At the latter institution she was the founding director of the Jack and Stella Kerouac Center for American Studies (which I assume is now called the Jack and Stella Kerouac Center for the Public Humanities).

With those credentials, it is no surprise that this is an informative and well-written biography. I found it especially satisfying because it dealt with a subject I know a lot about but presented much information that was new to me about the life of Herbert Huncke. You may already know that Huncke is the Times Square hustler from whom Kerouac likely got the term "beat," but did you know about his interactions with sex researcher Alfred C. Kinsey, his time as a galley worker on a ship, his autobiography (Guilty of Everything: The Autobiography of Herbert Huncke), or that he loved cats?

You'll learn all that and more in Holladay's wonderful book, one that deserves a spot on your Kerouac bookshelf.


Below is a picture of Shelf #5 (last one!) of my Kerouac bookshelf showing the placement of this book (7th from the left that you can see in the picture) on the day I started curating my collection. Next up: Kerouac, the Word and the Way: Prose Artist as Spiritual Quester by Ben Giamo.

Posted by Rick Dale, author of The Beat Handbook at 10:21 AM