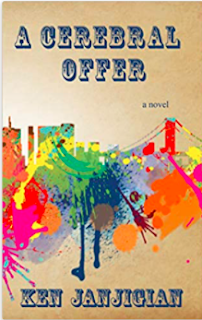 This is the second novel of its genre I've received for review in the last 3 months (see Circus of the Sun). I say "genre" for lack of a better categorization; suffice to say they're both novels written memoir-style (in first person), contain many Beat Generation references/themes, are set in San Francisco, revolve around a burning hot love affair, and include a lot of pop culture references (in Circus of the Sun, music, in A Cerebral Offer, movies).
A Cerebral Offer (Livingston Press, 2020) is a 334-page novel written by Ken Janjigian, who is an assistant dean at American University. He lived in San Francisco for several years in the 90s. While both novels describe actual San Francisco places in depth, this one is based in modern times (with references to Trump and Biden along the way). It's the story of a man, Harry Gnostopolos, who makes a bio film about Kerouac (aptly titled Kerouac) and comes into enough money from it to purchase an old-time movie theater in San Francisco's Richmond District (on Cabrillo street and, appropriately, named the Cabrillo. His girlfriend through all of the trials of making a go of an art-house indie movie theater in a less-than-thriving section of San Francisco is Dana, a graphic designer who lives with Harry in an apartment above the theater.
The novel starts with an uplifting quote from On The Road when Kerouac first sees "the fabulous white city of San Francisco on her eleven mystic hills." But all is not well for the Cabrillo despite having added a small bar and making other modifications, and the financial stress is deepening a rift between Harry and Dana, who thinks Harry is obsessed with Kerouac and the Beats, "just a bunch of juvenile misogynists who never grew up" (p. 72). Along the way, a Neal Cassady-type character named Jackson Halifax re-enters Harry's life (they had been part of a counterculture group dubbed The Sunsetters in San Francisco's bohemian heyday) and disrupts things in a couple of ways. First, he is instrumental in connecting Harry with Nadine, beginning a torrid but inconsistent love affair. And second, he talks Harry into a two-part money-making crime caper that ultimately involves a well-known conspiracy theory about John F. Kennedy.
Janjigian's descriptive prose is evocative, beginning with the opening paragraph about the fog rolling in from the bay across the Richmond District.

Richmond's most frequent visitor was actually the fog. It rolled in early and daily all white and pristine over the Marin County hills from the north, majestically crossing the bay as if it were on a mission before it grayed and slowed to a shrouded pause right about the Cabrillo." (p. 7)

His characters are sharply defined and believable. Nadine is everything Dana is not, including her completing her MA thesis on the influence of Beat women on feminist 60s literature. Jackson is a wildman -- successful writer, boxer, unsuccessful vintner, and supreme disturbance in Harry's life. The relationship between Harry and Nadine is well-crafted and nicely captures that heady feeling you get when you start a star-crossed romance.
Harry loves Woody Allen movies, something he acknowledges requires "separating the art from the artist" (p. 144). I note that this is necessary with the male Beat writers as well, something Nadine is able to do. She even goes so far as to say that the Beat writers "are really less sexist than they appear once you dig deeper" (p. 119).
I'll stop there with storylines. Another reviewer aptly called A Cerebral Offer a Beat thriller, and I don't want to spoil the thrills.
One doesn't need to be a Beat aficionado to understand and enjoy A Cerebral Offer, but it helps with certain references like mentioning the On The Road moment when Dean abandons Sal in Mexico (pp. 314-315) or dropping the following parenthetical sans explanation: "I did not subscribe to first thought, best thought" (p. 323). If anything, the novel provides enough pointers that any Beat neophyte interested will have enough information to go exploring successfully on their own. Burroughs, Corso, Ginsberg's "Howl," di Prima, Johnson, Waldman, and Hettie Jones all get mentioned.
If my speed in reading a novel is any indication of my engagement -- and I think it is -- then this is one engaging read because I read it over the course of two days. It is coherently written, bittersweet at times, insightful, funny, and of course, you had me at Kerouac (catch the movie reference there?).
I recommend A Cerebral Offer highly. It's available on Amazon, Bookshop, and other booksellers.
Posted by Rick Dale, author of The Beat Handbook at 2:56 PM

Thanks much for the review. A Cerebral Offer does indeed mix love, intrigue, and nostalgia for the Beats in a compelling manner. Of course I'm prejudiced in part, being the publisher!

Joe, it was my pleasure to review A Cerebral Offer. Hopefully the review translates to some additional sales!