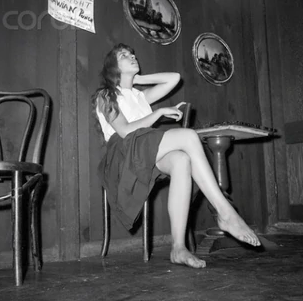 Beat poet Elise Cowen died on this date -- February 27 -- in 1962. She appeared as Barbara Lipp in Jack Kerouac's Desolation Angels and was a close companion to Allen Ginsberg (indeed, it is reported that they were lovers for a brief time). The bulk of her work, tragically, was destroyed after her death by suicide, but some of it survives, including the two poems here (after the bio -- which starts with an enlightening quote from Gregory Corso about the lack of women representation in the Beat movement).
Here's an excerpt from Kerouac's Desolation Angels:

We stayed together for an awful long time, too, years—Julien called her [Alyce] Ecstasy Pie—Her best friend, the dark haired Barbara Lipp, happened by circumstance to be in love with Irwin Garden— Irwin had steered me to a haven. In this haven I slept with her for lovemaking purposes but after we were done I’d go to the outer bedroom, where I kept the winter window constantly open and the radiator shut off, and slept there in my sleepingbag. Eventually that way I finally got rid of that tubercular Mexican cough—I’m not so dumb (as Ma always said). (1995, Riverhead Books, pp. 329-330

Click here to read an interesting article about Cowen and her connection to poetry giant Emily Dickinson.