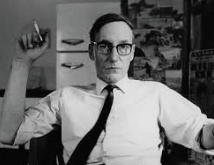 Core Beat Generation member, writer, and cultural icon William S. Burroughs was born this date -- February 5 -- in 1914. He appeared in several of Jack Kerouac's works: as Old Bull Lee in On The Road; Frank Carmody in The Subterraneans; Bull Hubbard in Book of Dreams, Desolation Angels, Doctor Sax, and Visions of Cody; Bull in Tristessa; Bill/William Seward Burroughs in Lonesome Traveler; Wilson Holmes Hubbard in Vanity of Duluoz; Bill Dennison in The Haunted Life and Other Writings; and, Will Dennison in The Town and the City and And the Hippos Were Boiled in Their Tanks.
Here is some of what Kerouac said about Burroughs in On The Road:

It would take all night to tell about Old Bull Lee; let's just say now, he was a teacher, and it may be said that he had every right to teach because he spent all his time learning; and the things he learned were what he considered to be and called "the facts of life," which he learned not only out of necessity but because he wanted to. He dragged his long, thin body around the entire United States and most of Europe and North Africa in his time, only to see what was going on; he married a White Russian countess in Yugoslavia to get her away from the Nazis in the thirties; there are pictures of him with the international cocaine set of the thirties--gangs with wild hair, leaning on one another; there are other pictures of him in a Panama hat, surveying the streets of Algiers; he never saw the White Russian countess again. He was an exterminator in Chicago, a bartender in New York, a summons-server in Newark. In Paris he sat at cafe tables, watching the sullen French faces go by. In Athens he looked up from his ouzo at what he called the ugliest people in the world. In Istanbul he threaded his way through crowds of opium addicts and rug-sellers, looking for the facts. In English hotels he read Spengler and the Marquis de Sade. In Chicago he planned to hold up a Turkish bath, hesitated just for two minutes too long for a drink, and wound up with two dollars and had to make a run for it. He did all these things merely for the experience. Now the final study was the drug habit. He was now in New Orleans, slipping along the streets with shady characters and haunting connection bars. (Penguin Books, 1976, pp. 143-144)

Regular readers of The Daily Beat need no biographical details on Burroughs, and others can simply Google his name to reveal a trove of information on this seminal Beat figure, author of classics such as Naked Lunch and Junky.

Posted by Rick Dale, author of The Beat Handbook at 11:29 AM