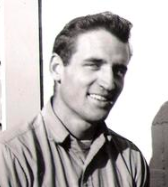 On this date -- February 8 --  Neal Cassady was born (in 1926). Cassady served as a significant muse for Jack Kerouac and appeared as Dean Moriarty in On The Road*; Cody Pomeray in Visions of Cody, Book of Dreams, Big Sur, Desolation Angels, and Book of Sketches; Leroy in The Subterraneans; and Neal Cassady in Lonesome Traveler, Desolation Angels, and Satori in Paris.

So much has already been said about Cassady that is strains my brain to think of anything original to say. Thus, we'll let Kerouac's description of Dean's parking attendant prowess from On The Road suffice:

The most fantastic parking-lot attendant in the world, he can back a car forty miles an hour into a tight squeeze and stop at the wall, jump out, race among fenders, leap into another car, circle it fifty miles an hour in a narrow space, back swiftly into tight spot, hump, snap the car with the emergency so that you see it bounce as he flies out; then clear to the ticket shack, sprinting like a track star, hand a ticket, leap into a newly arrived car before the owner's half out, leap literally under him as he steps out, start the car with the door flapping, and roar off to the next available spot, arc, pop in, brake, out, run; working like that without pause eight hours a night, evening rush hours and after-theater rush hours, in greasy wino pants with a frayed fur-lined jacket and beat shoes that flap. (Penguin Books, 1976, p. 9)

To the ever-kinetic Neal Cassady -- Happy Birthday in Beat heaven.


P.S. Happy Birthday, also, to my friend Keith Fisher, who turned me on to Kerouac in the first place and served as my Dean Moriarty on quite a number of adventures in life.


*According to the Find feature on my electronic version of On The Road, "Dean" appears 825 times.
Posted by Rick Dale, author of The Beat Handbook at 11:09 AM