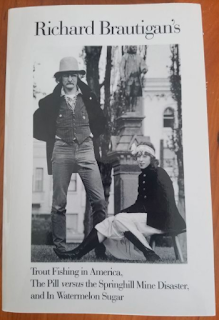 I just finished the final book in this 3-parter by Richard Brautigan (1935-1984). It was published in 1989 and includes his famous Trout Fishing in America (1967), a poetry collection The Pill versus the Springhill Mine Disaster (1968), and the prose piece In Watermelon Sugar (1968). I read them in that order and wanted to say something about all three and about Brautigan in general.
Of course, we have to dispense with the question, "What does this have to do with Jack Kerouac?" I don't know if Brautigan was a Beat author. Some say yes, some say no, some say he was a later-Beat. Indeed, he didn't make his way to San Francisco until 1956, which of course post-dates the Beat-rich 40s and early 50s but pre-dates the publication of On The Road. Brautigan certainly hung with the Beat crowd in Frisco (Allen Ginsberg, e,g.), although I can't confirm he met Kerouac from any of the biographies whose index I thumbed through or based on my Internet searching. The general sense in the Jack Kerouac Facebook group is that Brautigan and Kerouac never met face-to-face, although Kerouac scholar Dave Moore, the group's administrator, posted that Brautigan said, "I was a little disappointed over a critical reaction that tended to associate 'Confederate General' with the work of Jack Kerouac, Allen Ginsberg, etc. I did not write my novel in an effort to imitate those writers." He is referring to hsis first published novel (1965), A Confederate General from Big Sur.
Brautigan and Kerouac have similarities. They both died in their 40s, Brautigan of a self-inflicted gunshot and Kerouac of self-inflicted alcoholism (Brautigan was an alcoholic, too). Their prose is poetic and quasi-autobiographical. They both spent time in the hospital with mental health diagnoses. Brautigan married twice and Kerouac married thrice.
Moving on. I liked Trout Fishing in America. It is hard to describe. It's a series of titled anecdotes that revolve around places in America and the people who inhabit them. There are some recurring themes and characters but no real plot as you would expect in a "novel." "Trout Fishing in America" is a phrase that's used in various unusual ways: person, place, and thing. Wikipedia has a pretty good overview of the book. It's definitely poetic prose, and satirical, comical, and worth checking out.
The Pill versus the Springhill Mine Disaster (1968)is a collection of 98 poems. The title poem is below:

The Pill Versus the Springhill Mine Disaster
When you take your pill
it's like a mine disaster.
I think of all the people
lost inside of you.

The poems are mostly short and cover a variety of topics. Based on this collection, I can't say Brautigan is one of my favorite poets but he is certainly competent and worth reading.
In Watermelon Sugar was my favorite of the three works. It's similar in its experimental style to Trout Fishing in America, but has more of a plot and is even more fantasy-laced. It's about a group of people who live in a place called iDEATH and who make everything out of watermelon sugar, from clothing to building materials. I've heard its style referred to as magical realism. Once again, Wikipedia has a useful entry on the book. I note that the chapter titled "My Name" blew my mind -- I'm not sure why. Click HERE for an excerpt (about half the chapter). I was enthralled with the whole story, and I hope you will consider reading it if you haven't done so already.
Will I read more Brautigan? Yes. Do you have any suggestions based on what I've said above about what to read next? Maybe A Confederate General from Big Sur?
UPDATE (2-23-21): The following was posted in the Jack Kerouac Facebook group (which you definitely want join if you haven't already done so):
Jeffrey Weinberg
Back in 1991 when I was cataloguing books by other authors found in Sampas home on 2 Stevens St, Lowell, that belonged to Jack - I found a copy of Brautigan's "All Watched Over By Machines of Loving Grace." The book was not signed or inscribed by Brautigan but Jack had the book on his shelf.
UPDATE #2 (2-26-21): The following was posted in the Jack Kerouac Facebook group:
Bruno Winter
Maybe this helps, Rick--this is from William Hjortsberg's Brautigan biography, 'The Jubilee Hitchhiker':
"Jack Kerouac’s thirty-one-year-old daughter, Jan, sat in the hotel’s breakfast room with her companion, Milo, when Brautigan came lurching in, wearing jeans and a red T-shirt emblazoned with a Montana logo. Suffering from jet lag, Richard slumped at a nearby table, burying his head in his hands, “muttering something about a bottle of whiskey.” Jan and Milo started a conversation with the disheveled stranger. Brautigan told them about his close encounter in Harlem. When finished, he pulled his funny hat from his back pocket. “So, you see,” Richard said, “this hat saved my life.”
Kerouac left Milo alone with their new friend. Brautigan wasted no time before buying a bottle of whiskey and getting Milo “thoroughly plastered.” When Jan returned early in the afternoon, she found them both unconscious on her hotel room floor. Richard, Milo, and Jan started hanging out together. She made no mention in her memoir, Trainsong, of the time Brautigan encountered her father passed out under a urinal in a Big Sur bar. Perhaps he never told Jan that story. When Richard related the episode to Greg Keeler, “he seemed to light up—as if passing out under a urinal was . . . one of the top things a guy could do.” Jan Kerouac estimated that Brautigan consumed at least six quarts of whiskey over the next three days before his scheduled poetry reading. In the end, she thought Richard had drunk himself sober."
Posted by Rick Dale, author of The Beat Handbook at 11:21 AM