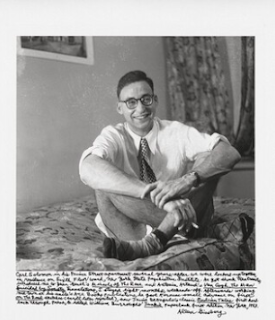 Carl Solomon died on this date -- February 26 -- in 1993. He appeared in two of Jack Kerouac's works: as Carl Rappaport in Visions of Cody and as Carl Solobone in Book of Sketches.

Allen Ginsberg met Solomon in a psychiatric hospital and subsequently dedicated his famous poem, "Howl," to Solomon. Solomon worked as an editor for Ace Books, owned by his uncle A. A. Wyn. There are several published letters from Jack Kerouac to Solomon discussing Ace possibly publishing On The Road. The latter never happened, but Ace did publish William S. Burroughs' Junkie; Solomon wrote the Publisher's Note in one version and the Introduction in another. Here's an excerpt from an April 7, 1952 letter from Kerouac to Solomon:

But here's my main idea in this note (and apart from fact that I feel you're okay and wish you'd like me more), I have an idea we could publish ON THE ROAD regular hardcover and papercover, extracting 160-page stretch for 25c edition (the sexy narrative stretch, I'll designate it when I mail in full manuscript some time soon). (Jack Kerouac Selected Letters 1940-1956, 1995, Penguin Books, p. 342.

Click here to read a 1973 interview with Solomon by John Tytell titled, "Carl Solomon On Not Publishing Jack Kerouac." Oops.

RIP, Mr. Solomon.
Posted by Rick Dale, author of The Beat Handbook at 11:52 AM