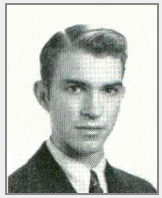 The Rawlinses lived a few blocks away. This was a delightful family--a youngish mother, part owner of a decrepit, ghost-town hotel, with five sons and two daughters. The wild son was Ray Rawlins, Tim Gray's boyhood buddy. Ray came roaring in to get me and we took to each other right away. We went off and drank in the Colfax bars. One of Ray's sisters was a beautiful blonde called Babe--a tennis-playing, surf-riding doll of the West. She was Tim Gray's girl. And Major, who was only passing through Denver and doing so in real style in the apartment, was going out with Tim Gray's sister Betty. I was the only guy without a girl. I asked everybody, "Where's Dean?" They made smiling negative answers. (Penguin Books, 1976, p. 41)

Notably, White is credited with suggesting the practice of sketching with words to Kerouac, a practice Kerouac implemented in the notebooks he always carried with him. Kerouac defined it in a 1955 letter to Neal Cassady as "writing fast without thought of words" (Jack Kerouac: Selected Letters 1940-1956, Penguin Books, 1995, p. 473).

Sketching came to me in full force on October 25th, the day of the evening Dusty and I went to Poughkeepsie with Fitzgerald--so strongly it didn't matter about Carl's offer and I began sketching everything in sight, so that On The Road took its turn from conventional narrative survey of road trips etc. into a big multi-dimensional conscious and subconscious character invocation of Neal in his whirlwinds. Sketching (Ed White casually mentioned it in 124th Chinese restaurant near Columbia, "Why don't you just sketch in the streets like a painter but with words") which I did . . . . (Ibid, p. 356)

To which I say, one never knows when a passing comment will have significant influence on another person.

Posted by Rick Dale, author of The Beat Handbook at 8:58 AM