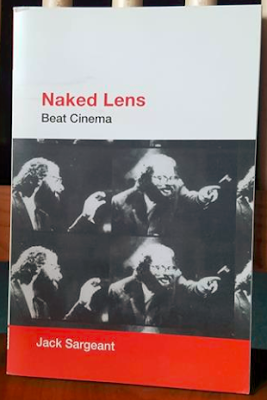 Item #103 in my Kerouac bookshelf curation project is this paperback 2008 Soft Skull Press first printing of Jack Sargeant's Naked Lens: Beat Cinema. 251 pages, it measures about 5-3/8" x 8-3/8" and is in very good condition. The provenance is that I received it as a review copy.

Naked Lens: Beat Cinema is an exploration of the celluloid expression of the Beat movement. It received some good reviews, one being here at Underground Film Journal and another here at Electric Sheep.

As expected, 1959's Pull My Daisy plays a prominent role, taking up the whole first chapter. If you haven't seen this Robert Frank/Alfred Leslie film narrated by Kerouac and starring Allen Ginsberg, Gregory Corso, David Amram, and other Beat figures, click here to watch it. Subsequent chapters deal with films such as John Cassavetes' Shadows (click here to watch it) and Conrad Rooks' Chappaqua (couldn't find a link to the full film). The first part of the book (Chapters 1-12) ends with an interview with Allen Ginsberg. The second part of the book focuses on William S. Burroughs (Chapters 10-13). For example, there is a discussion of the animated film, Ah Pook is Here, and the claymation film, The Junky's Christmas. The books wraps up with a 7-part Appendix, a bibliography, and an index of the over 300 films mentioned in the book.

My one gripe about this book is the font size. It is so small as to be nearly unreadable to these old eyes (without a magnifying glass). That aside, Naked Lens: Beat Cinema is a book that needed to be written and it makes sense to have it on one's Kerouac bookshelf.


Below is a picture of Shelf #3 of my Kerouac bookshelf showing the placement of this book (23rd from the left) on the day I started curating my collection. Next up: Scientologist! William S. Burroughs and the 'Weird Cult' by David S. Wills (which I not only read but also reviewed).


Posted by Rick Dale, author of The Beat Handbook at 10:18 AM