Curation #122 from my Kerouac bookshelf: The Long Slow Death of Jack Kerouac by Jim Christy 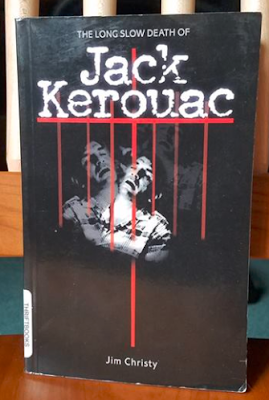 Item #122 in my Kerouac bookshelf curation project is this paperback 1998 ECW Press edition (no printing number) of Jim Christy's The Long Slow Death of Jack Kerouac. 110 pages, it measures about 4-3/4" x 7-3/8" and is in very good condition. The provenance is uncertain, but I likely acquired it via Amazon.

This is one of the more concise Kerouac biographies I've read. While the back cover blurb says -- and the title suggests -- that it focuses on the last ten years of Jack's life, it does cover his entire life. It takes about 50 pages to get to the last 10 years.

Reviewer Brian Foyle, who is quoted in the book twice (I would love to know which quote he doubts he said and which one he regrets saying), points out that Christy critiques other Kerouac biographers for making mistakes and then makes mistakes himself. Foyle's review -- which I think is pretty spot on -- can be read here.

This is a very readable biography -- I re-read it in its entirety yesterday -- and one thing that strikes me is that Christy "gets" Kerouac. For example, he sees Kerouac as the compassionate, religious writer that he really was. For example:


I've spoken to people who, upon reading On the Road, immediately quit their jobs, their schools, and set out for adventure. Often they put aside an entire way of thinking about the world, and their own world widened with new music to listen to, new books to read -- but the most important, and most overlooked, of the gifts of the book, and all others written by Kerouac, is the gift of compassion. (p. 36).


Or as Christy opines on p. 40, "the writer's great heart was as wide open as the road itself." Christy compares Kerouac to St. Augustine and draws a number of parallels.

Christy paints a different  picture of Kerouac's last years, ones that most people think of as only about alcoholic decline, providing some positive insights into Jack's last decade. Of note is Christy's description of the beating Jack took outside the Cactus bar not long before he died, the details of which support my long-standing theory that Kerouac was, in effect, murdered (as I wrote about here).

Typical biographical inaccuracies aside, this is an interesting Kerouac biography and deserves a spot on a comprehensive Kerouac bookshelf.

Below is a picture of Shelf #4 of my Kerouac bookshelf showing the placement of this book (16th from the left) on the day I started curating my collection. Next up: Offbeat: Collaborating with Kerouac by David Amram.

Posted by Rick Dale, author of The Beat Handbook at 9:13 AM