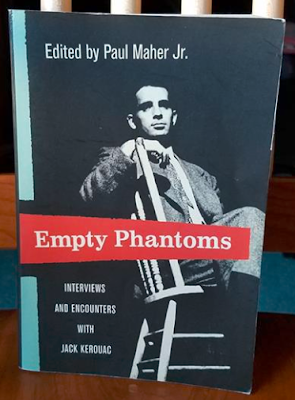 Item #120 in my Kerouac bookshelf curation project is this paperback 2005 Thunder's Mouth Press 1st printing of Empty Phantoms: Interviews and Encounters with Jack Kerouac edited by Paul Maher Jr. Totaling 505 pages, it measures about 5-3/8" x 8-1/8" and is in very good condition. The provenance is that it was a 2008 Christmas gift from Crystal (I know that because she inscribed the dedication page).

As the back cover blurb states,


I can't speak to the claim about "nearly all," but this particular copy is not the "Expanded & Revised" edition (which I have not seen but would like to); nevertheless, it contains 56 separate pieces. It also includes an introduction by the editor, and an appendix with the story of Kerouac's discharge from the Navy and a copy of his actual military medical record relating to his discharge (noted as the first time it had been published). The title of the book comes from Kerouac saying to Mike Wallace, "We're all just empty phantoms."

The reason the title says "encounters" is that -- despite the the above blurb focusing on interviews -- there are a number of essays about Kerouac as well as interviews with him. For example, included is John Clellon Holmes' heart-wrenching essay about Jack's death, "Gone in October" -- a must read for Kerouacians.

Kudos to Maher for bringing this ambitious project to fruition. He notes in the acknowledgement the help of Kerouac scholar Dave Moore from the U.K., who had already keyed many of the interviews into text files.

This is essential Kerouac in his own words, as well as those of others, and it's helpful for scholars to have it in one place. It's an interesting read for fans as well. Thus, it deserves a spot on any self-respecting Kerouac bookshelf.

Below is a picture of Shelf #4 of my Kerouac bookshelf showing the placement of this book (14th from the left) on the day I started curating my collection. Next up: Where the Road Begins: An Anthology edited by Kathy Devlin et al.

Posted by Rick Dale, author of The Beat Handbook at 10:06 AM