Curation #107 from my Kerouac bookshelf: The Wild Boys: A Book of the Dead by William S. Burroughs 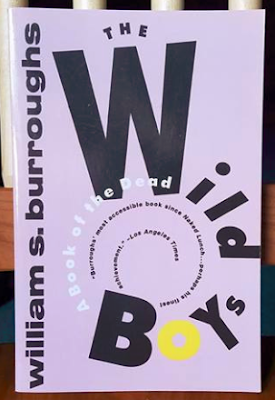 Item #107 in my Kerouac bookshelf curation project is this paperback 1992 (first published by Grove in 1971) Grove Press 10th printing edition of The Wild Boys: A Book of the Dead by William S. Burroughs. 184 pages, it measures about 5-1/4" x 8" and is in very good condition. The provenance is likely that I acquired it via Amazon.

Regular readers of The Daily Beat need no explanation for why this is on my Kerouac bookshelf, but for newcomers, suffice to say that Burroughs was one of the core Beat Generation figures along with Kerouac and Allen Ginsberg (and others such as Lucien Carr, Gregory Corso, John Clellon Holmes, Herbert Huncke, and even, I suppose, Neal Cassady -- who am I missing?). Now on to the book.

According to the back cover blurb, "The Wild Boys is a futuristic tale of global warfare in which a guerrilla gang of boys dedicated to freedom battles the organized armies of repressive police states." I tried reading it when I first got it, and gave up. Same with Naked Lunch (curated soon). The only Burroughs book I have made it through is Junky (curated next).


Burroughs is indeed a serious man and a considerable writer. But his books are not really books, they are compositions that astonish, then pall. They are subjective experiences brought into the world for the hell of it and by the excitement of whatever happens to be present in Burroughs's consciousness when he writes.

The Wild Boys appears to be classic Burroughs, full of cut-up and spontaneous prose. And my hat's off to his influence on pop culture (for example, the appearance of David Bowie's Ziggy Stardust is based on descriptions in this book).

It seems that you either "get" or "like" Burroughs' writing or you don't. I wish someone would tell me the key to one or both. I fear the problem is that I am just not cool enough, something for which there is no fix.


Below is a picture of Shelf #4 of my Kerouac bookshelf showing the placement of this book (1st on the left) on the day I started curating my collection. Next up: Junky by William S. Burroughs.

Posted by Rick Dale, author of The Beat Handbook at 9:39 AM

Rick--you're CERTAINLY "cool enough" to get Burroughs but truth be told, his work is tough because (paradoxically) you're someone with an extensive reading history. Reading Burroughs' works--particularly the cut-ups--is like having your entire nervous system (and reading cognition processes) rewired to an uncomfortable degree. The idea of "control"--whether exercised through drugs, social convention, political-economic pressure, or even language--is central to understanding WSB's work. How do you tackle reading texts that at their very core are attempts by the writer to NOT exert "viral" control over the reader through the always-already-givens of language, sentence structure, ideology, etc? How do you model revolutionary praxes in something other than dour political screeds? Maybe a more important question is this: WHY deconstruct reading processes I've spent decades trying to perfect? Maybe reading 'The Wild Boys' (or 'Naked Lunch' or the Nova Trilogy) is simply not worth the effort.

Reading Burroughs has nothing really to do with being cool--it's more a question of a willingness to (in a paraphrase of Burroughs) dismantle the "is of identity."

A couple of recommendations--try LISTENING to Burroughs's works, preferably read by the author. The humor of the routines and the jagged, cinematic narrative cuts often come through with greater clarity in audio form. Also, you may find scholarly addenda to Uncle Bill's works by someone like Oliver Harris to be helpful. His introductions to some of the "restored" Burroughs novels are really wonderful. Bear in mind that this places you smack dab in the middle of the whole 'whose text am I reading' problem (isn't foregrounding someone else's interpretation submitting to another form of control?), but such an approach may be a more gradual and comfortable means to a valuable end...