Curation #119 from my Kerouac bookshelf: Kerouac in Florida: Where the Road Ends by Bob Kealing 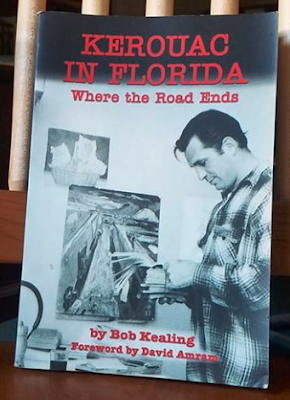 Item #119 in my Kerouac bookshelf curation project is this paperback 2004 Arbiter Press 2nd printing of Kerouac in Florida: Where the Road Ends by Bob Kealing. 167 pages, it measures about 6" x 9" and is in good condition. The title page is signed by the author, which makes me think I got it directly from him although my memory is foggy on that point. Another memory gone and foiling my ability to provide the provenance of an item in my collection. But, it is what it is. Maybe Bob will write and remind me if he sees this.

In 1996, award-winning journalist Bob Kealing wrote an article in the Orlando Sentinel about the run-down cottage on Clouser Avenue in College Park where Kerouac had lived with his mother in 1957-58. The rest of that story is that Kealing's article was the catalyst for the creation of the Jack Kerouac Writers In Residence Project of Orlando, Inc., which is still thriving and you can read about here.

As regular readers of this blog know, Clouser Avenue wasn't the only place in Florida where Jack lived, and Kealing's book describes the years in Jack's life when he was moving between Florida (Orlando and St. Petersburg) and New York and Massachusetts. The book is engagingly written, and includes never-before published photographs of Kerouac, a foreword by David Amram, a Kerouac Florida Time Line, a selected bibliography, and an index.

Kealing is a reporter and thus a good writer, and he used up a lot of shoe leather for this book, traveling to various locations to review materials and interview people. Yes, Florida is where the road ended for Jack, and this book includes details of his alcoholic demise. But it also provides a lot of other details from the period, so it is not a downer at all (especially given that we all know the end of the story) and it helps flesh out the Kerouac story in Florida.

It's a good read and I recommend it for your Kerouac bookshelf.

P.S. Kealing was not only instrumental in saving the Clouser Avenue house and starting the Kerouac Project in Orlando but also in finally getting Kerouac's sister Caroline's ("Nin") Orlando grave a gravestone (click here for the story) in 2009 (Nin died in 1964).


Below is a picture of Shelf #4 of my Kerouac bookshelf showing the placement of this book (13th from the left) on the day I started curating my collection. Next up: Empty Phantoms: Interviews and Encounters with Jack Kerouac edited by Paul Maher Jr.

Posted by Rick Dale, author of The Beat Handbook at 10:46 AM