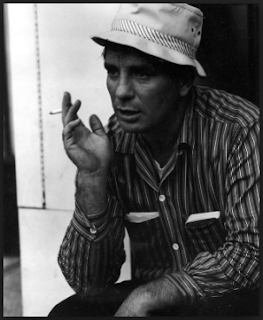 Occasionally it's fun to see what Jack Kerouac was doing or thinking about on whatever calendar day it happens to be at the time. In a letter postmarked this date, November 26, in 1960 addressed to his sister, Caroline Kerouac Blake (Nin), Jack wrote:

You see I'm probably the only "famous" writer in the world who pays no attention to his mail--A lot of it I just throw away, a lot of it I just file away in my Interesting Letters or Fan Letters files--When I get embossed invitation from Sherman Billingsley to attend the Celebrity Party at the Stork Club I'm hep to know (1) He only wants me to get in the habit of spending $200 a night for drinks and steak in his joint, (2) His reasons for inviting me are not because of what I wrote but because I'm a "writer" so I just file the embossed invitation away and dont [sic] answer him at all. (Then he's not offended, he thinks I've never gotten it)--See? Or when the committee for a Better Africa invites me to Nigeria as a goodwill ambassador I simply pretend I'm out of town for a long time by not answering. (This is what [Marlon] Brando does, he simply doesnt [sic] answer his public type mail, he didnt [sic] even answer me about filming ON THE ROAD three years ago, he's smart. He goes about his business, which is making movies, period). Me, too. I just go about my business of writing and trying to stay home as much as possible and playing with the cats and eating with Ma and watching TV and studying my books, like I always did. Otherwise I'd let myself be snaked into the position of great writers like Steinbeck who lost his greatness because he did everything everybody wanted him to do: attended dreary luncheons. lectured around the country, joined pestiferous Lit'ry Guilds with more luncheons, more talk, more kudos, wrote articles when asked (as though he had written Grapes of Wrath on order like that!) and finally deteriorated into a businessman with a secretary and piles of mail. I want to go on being a bum: that's the secret of my joy, and without my joy there's nothing to write about . . . . (Jack Kerouac: Selected Letters 1957-1969 edited by Ann Charters, pp. 314-315)


Jack was living at 49 Earl Avenue in Northport, Long Island, NY with his mother at the time of this letter (click here for a picture of the house). We know from biographies that he was deluged with fans showing up at his door in addition to writing him letters. I wonder if those files labeled Fan Letters (and Interesting Letters, too) are in the Berg Collection. They would be something to see, right? The collection overview (click here) indicates that it includes "incoming and outgoing correspondence."

The letter goes on past the above quote. Jack had a lot on his mind this date in 1960. If you haven't read his letters, I recommend it highly. It's an enlightening exercise to read his own words about what was going on in his life and not just depend on biographies for such insights.

Posted by Rick Dale, author of The Beat Handbook at 9:36 AM