The Beats and Catholicism 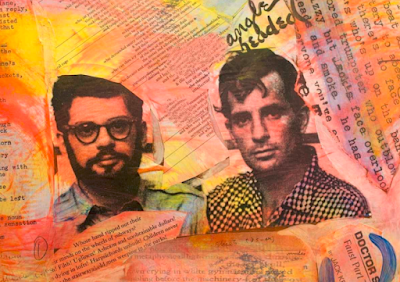 I just ran across this article in Angelus-- dated today -- about the Beats and Catholicism. I don't agree with the author on every point. I agree that religion influenced Beat literature, but to say the dominant religious influence was Roman Catholicism is a stretch once you go beyond Kerouac. Fortunately, the article focuses mainly on Jack, whose writing explicitly reflects his Catholic upbringing and beliefs.

Angelus appears to be the magazine of the Archdiocese of Los Angeles (the word means a Catholic devotion commemorating the Incarnation). It's interesting to see an article about the Beats in a Catholic magazine -- I suspect they will take some grief for the subject matter since the Beats espoused behaviors that were antithetical to Catholic dogma.


Here is the actual link for future reference: https://angelusnews.com/news/mike-aquilina/original-hipsters-the-beats-catholic-confusion
Posted by Rick Dale, author of The Beat Handbook at 2:56 PM

Hey I know this is off topic but I was wondering if you knew of any widgets I
could add to my blog that automatically tweet my newest
twitter updates. I've been looking for a plug-in like this for quite some time and was hoping maybe you would have some experience with something like
this. Please let me know if you run into anything. I truly enjoy reading
your blog and I look forward to your new updates.

Sorry, but I haven't run into such a widget.