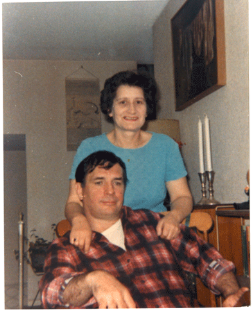 In our continuing series of posts presenting what Jack Kerouac wrote in his letters or journals on a particular date, we offer this letter to Allen Ginsberg dated November 28, 1966:

Allen--
Wedding would be after move to Lowell, maybe January--maybe before New Year's too, with speedy move & settle--I enmeshed in domestic & invalid problems, won't write till house in country (around Lowell) & private study & own door to trees--etc.--but hitting up to new lit'ry season shot.

The marriage to which Jack refers is to Stella Sampas. "Invalid problems" likely refers to Jack's mother, who had suffered a stroke in September. Some say it was at least in part a marriage of convenience for Jack, providing him with a live-in caretaker for his mother.

And now for a little mystery. One date I find for Jack and Stella's marriage is November 18, 1966. That's according to Gerald Nicosia's Memory Babe: A Critical Biography of Jack Kerouac as well as Encyclopedia.com and several other Internet sources. Ann Charters says November without a date in her Kerouac biography. In their respective Kerouac biographies, Dennis McNally and Tom Clark report it as November 19. Seems like biographers could get a wedding date correct.

In any case, it appears that Jack had already married Stella when the above letter was dated.

I have a couple of possible explanations. Someone has their dates wrong (Charters in the above letter or the biographers/sources mentioned), or Jack was already married and was misleading Ginsberg for some reason. Or maybe Jack had written the letter before getting married and it never got postmarked until the 28th and that is the date Charters used. Or I am missing something . . . .

What do you think?
Posted by Rick Dale, author of The Beat Handbook at 10:11 AM