The Big Cage by Robert Lowry 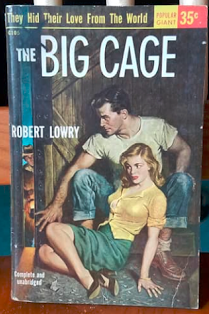 In Jim Christy's The Long Slow Death of Jack Kerouac (curated here), he mentions a 1949 book by Robert Lowry titled, The Big Cage. I blogged about purchasing that book here. FYI, my copy is a paperback second printing from October 1952.

While I'm not curating Lowry's book per se, I did want to mention it again after having read it. Here is what Christy said about The Big Cage:


Not too long after reading On the Road, I discovered the works of Robert Lowry, particularly The Big Cage, in which his autobiographical hero covers much the same territory during the same years as Kerouac's characters. (p. 40)


In short, The Big Cage is an autobiographical Bildungsroman. Similar to Kerouac in Visions of Gerard, Lowry's central character remembers things from a very early age. In this case, his "baby bunk." And the novel unfolds from there as the protagonist experiences the trials and tribulations of youth and early adulthood, the writing life, women (not that much sex despite the covers implying such), reading, family matters, travel, and so on.

I say "and so on" because there is a lot here to digest (415 pages), but it never once gets so bogged down with details that one wants to stop reading. At least that's how it was for me. Lowry's writing style is very traditional -- not like Kerouac's -- but it gets the job done for a memoir-like novel.

You can find this book on-line at various outlets like Amazon and Abebooks and eBay. Or you could use Bookfinder.com, a useful resource my great friend Richard turned me on to. You probably wouldn't regret the 10 or so bucks you'd need to plunk down to buy it. The cover's worth that.

Posted by Rick Dale, author of The Beat Handbook at 10:04 AM