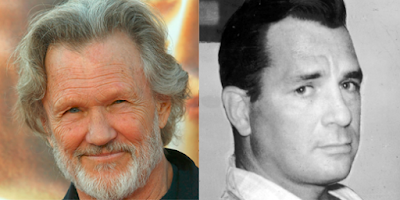 You never know what connections you'll find when you go down the Internet rabbit-hole. Today I was thinking about Sunday and a great song, "Sunday Morning Coming Down," came to mind. Next I thought of its songwriter, Kris Kristofferson, and wondered about possible connections between him and Jack Kerouac. Kristofferson was only born 14 years after Jack, so they may well have crossed paths in person.

Naturally, I started with Google, and the first article to appear was about Hayes Carll, a country singer-songwriter who I just last week learned about from our friends, Frank and D.d. Here's a quote from the article:


Hayes Carll is often considered the logical heir to songwriting greats Kris Kristofferson, John Prine, and Townes Van Zandt, but if it hadn’t been for a chance encounter during his adolescence he could just as easily have been the next Jack Kerouac.


So there's a Kristofferson-Kerouac connection: both of them mentioned in the same sentence. But what else might there be?

In his continuous quest for liberation, both physical and spiritual, Kristofferson found in the Beat poets during the early 1950s inspiration and affirmation of the need to challenge social conformity. (p. 15)

I can't find any mention of a meeting between Kristofferson and Kerouac, or that Kerouac was influenced by Kristofferson. Jack likely didn't know about him as Kristofferson's debut album came out in 1970, the year after Kerouac died.

And there's this (the only mention of Kristofferson in the Jack Kerouac Facebook group -- written by yours truly -- but I had forgotten about it):


I was just reading Chapter 3 in Lonesome Traveler (The Railroad Earth, which was published in Evergreen Review as "October in the Railroad Earth"), and noticed this phrase: "on the sunny Sunday afternoon sidewalk." It made me think of Kris Kristofferson's excellent song, Sunday Morning Coming Down, which has the phrase, "on the Sunday morning sidewalk." Probably not enough here to make anything about, and I didn't find anything on-line, but is there a connection here? Was it an homage to Jack?

That could lend support to Hurd's position, that Kerouac influenced Kristofferson. Or it may be nothing at all.

The only time Kristofferson has been mentioned previously on The Daily Beat was in this guest post by Gerald Nicosia about the 1982 Jack Kerouac Conference, and that was a tangential connection at best (click here).

What connections between the two do you know about?

Posted by Rick Dale, author of The Beat Handbook at 11:52 AM