I'd be interested to know from readers what you thought of my recently concluded Kerouac bookshelf curation project, in which I curated every item on my Kerouac bookshelf starting on February 12, 2018 and proceeding through the 169 items that were on that shelf -- in order, top to bottom and left to right -- on that date. Did it inspire you to curate your own collection, or at least take a picture of it for posterity? Was it tedious in length or in similarity of posts (despite my efforts to put in some unique and relevant piece of information about each book)?

If the length bothered you, be glad I had 13* Kerouac or Kerouac-related items scattered about the house (living room bookcase, basket by the fireplace, bedside table, or even my Kerouac bookshelf but after I started the official curation -- a recent acquisition, say). Here's proof (picture taken today): 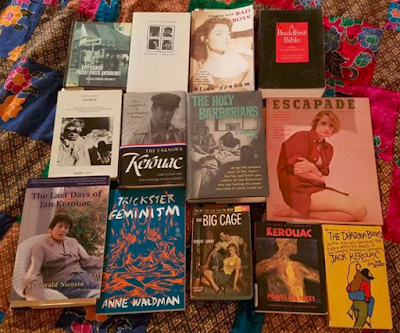 Kerouacophiles will be able to tell why I included all of these titles (5 of which are easy because they include -- exclusively or in part -- Kerouac's own writing).


If I had included all 13 of these items on my Kerouac bookshelf, the grand total would be 182. That qualifies me for the Kerouac Hoarder Awared given out yearly by the American Hoarder Society based in Dungsville, Indiana.

Seriously though, assuming I am not going to curate those 13 items (which is a good assumption), what in the world am I going to blog about henceforth? What hasn't been said about Jack Kerouac here or elsewhere? What would Kerouac do?