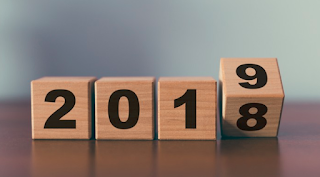 Last year in this space I decided to lower the bar and declare no New Year's Kerouac-olutions. That was in stark contrast to years past, when I had lists of 10. Click here to read last year's piece (as well as access a link to all past Kerouac-olutions).

But just what is a New Year's Kerouac-olution? It's just a New Year's Resolution dressed up in Kerouacian language. It doesn't have to be about Kerouac or even be related to Kerouac (although everything connects to Kerouac, as I have repeatedly claimed).

So what about 2019? Are there Kerouac-olutions afoot?

The answer is yes. I am in a different head space from last year. To wit, below are my 2019 New Year's Kerouac-olutions.

1. Drink a bottle of 21-year-old Bushmills single malt Irish whiskey (with help from Crystal)
2. Finish reading the book Sapiens by Yuval Noah Harari (already started - very good book!)
3. Use the treadmill at least twice a week, preferable three times (30 minutes per)
4. Lose a little bit of weight (10 pounds would be a good start)
5. Successfully complete training with Crisis Text Line (already started) and start volunteering with them 4 hours/week
6. Read Kerouac (no particular titles or amount)
7. Work back up to being able to do 30 push-ups in a row (what a weakling I've become)
8. Identify and purchase the best healthcare I can afford
9. Buy Crystal flowers at least 6 times (monthly was a fail in 2017)
10. Acquire a camper in time to attend some bluegrass festivals this coming summer


What are your Kerouac-olutions for 2019?

Happy New Year's Eve, everybody!
Posted by Rick Dale, author of The Beat Handbook at 10:26 AM

Mine definitely are to read more, write more, play more, and practice more.

Just came across your blog, thanks for reigniting my passion and love of Jack.

Glad to hear it, Surf Buddha. That's what we're all about!