December: A rite of passage month for Jack Kerouac 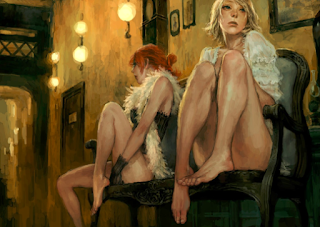 I was looking to do a "Jack Kerouac on this date" entry today but didn't find one for a year I haven't already posted about. There is a 1957 letter to Lucien Carr on December 14, but we already did 1957 and I'm trying not to repeat years. So, I looked through some chronologies that listed things that happened in December without a date.

One that struck my eye is that Jack lost his virginity to a red-haired prostitute in midtown Manhattan in December of 1939.* We know October was Jack's favorite month, but December must have held a special place in his memories as this is a rite of passage I assume most people never forget.

Although as I ponder my own experience, I have forgotten the month. Damn....

No matter, this is all trivial information at best and probably #NSFW to boot.

Cheer up -- we have additional favorite book surveys in and will report on that tomorrow.


*This is according to the Cosmic Baseball Association's Jack Kerouac Chronology and being more or less confirmed by Gerald Nicosia's Memory Babe: A Critical Biography of Jack Kerouac (p. 67). I say "more or less" because Gerry's retelling of the story is a bit ambiguous on year (it's either 1939 or 1940 -- I doubt 1940, though, because Jack broke his leg playing football that October and probably wasn't being too engaged with prostitutes).
Posted by Rick Dale, author of The Beat Handbook at 11:42 AM

Hi there, I enjoy reading through your article.

I wanted to write a little comment to support you.