Jack Kerouac's The Dharma Bums Chapter 8 in one sentence 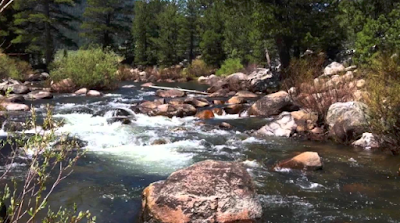 Your assignment for today was to read Chapter 8 of The Dharma Bums and summarize it in one sentence. Below is my one-sentence summary -- post yours as a comment. I'd also love to see general comments about the chapter, or questions.

The Dharma Bums Chapter 8 in one sentence:


It's Saturday and Ray and Japhy kill time in Bridgeport while Morley looks to buy a sleeping bag but he's unsuccessful so ends up renting a couple of blankets from the lake lodge, Japhy draws a magic Buddhist mandala in the road dust with his pickax to help them with the climb, they lock the car and start out walking down the lake road with their gear, Japhy tells Ray "comparisons are odious . . . it's all the same old void, boy," then after four flat miles they stop at the final little store at the foot of the trail and buy "candy and crackers and Cokes and such," Morley suddenly remembers he forgot to drain his car's crankcase and decides to head back to do that and catch up with them at their first camp, so Ray and Japhy start up the trail while talking a "blue streak," the lake begins to appear below them, they make up and trade haikus, and they stop by a "tremendous cataracting stream" where they dunk their heads and drink deeply of the cold water.


Your next assignment is to read The Dharma Bums Chapter 9 and post a one-sentence summary.

Posted by Rick Dale, author of The Beat Handbook at 9:25 AM