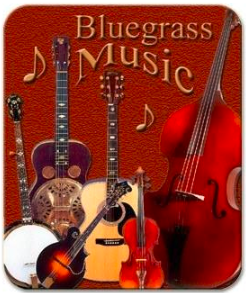 What about Jack Kerouac and bluegrass music, two passions of mine? Is there a connection?

We know Jack loved jazz, and jazz and blues influenced the originator of bluegrass, Bill Monroe, along with traditional music from Ireland/Scotland/England (think fiddle tunes) and southern gospel music.


Railroad Earth, a currently popular Americana band that does some bluegrass, got their name from Kerouac's "The Railroad Earth" in Lonesome Traveler.

And then there's this from p. 217 of Gerald Nicosia's Memory Babe: A Critical Biography of Jack Kerouac (speaking of Jack circa 1948 in NYC):


Performances of blues were rare in New York, but everyone in Cannastra's group bent an ear to his old race records, to hear in this music the roots of jazz. They listened to almost all forms of country music too, especially Bluegrass, which in New York was then called "plucking music" or "truckstop jukebox music." Jack shared their enthusiasm for it, and like the others he often danced to its driving rhythms. In one year they wore out twenty copies of "The Beatty Steel Blues," a straight instrumental, steel-guitar piece that later influenced rock-'n'-rollers like Elvis Presley. Although Bluegrass lacked the intricacy and revolutionary qualities of bop, it generated a fierce excitement just as bop did, and for that reason it was equally important to them. The folk singer Rambling Jack Elliott, a friend of Cannastra's, introduced the group to the classic Depression ballads of Woody Guthrie.


I'm going to assume here that the bluegrass Nicosia is referring to is truly bluegrass as we know it from Monroe on down to today (e.g., steel guitar is not a bluegrass instrument). I will quibble with the depiction of bluegrass as not having the intricacy of bop; it's always been intricate and has only gotten more complex since Bill Monroe's time. Revolutionary? Bluegrass is one of the few truly American genres of music.

Quibbles aside, it is good to think that Jack Kerouac enthusiastically listened to and even danced to bluegrass music. Knowing that may have been the case only makes me love him more.

As a bonus, click here for a link to my band, North Fork, performing a song I wrote, "Cry of the White Pine." That's me singing and playing the banjo. I played semi-professionally for 30+ years until my hand quit listening to my brain (dystonia).

Fortunately, I can still type. Typists get dystonia, too.

Posted by Rick Dale, author of The Beat Handbook at 10:39 AM

That cut should be covered by a hundred traditional bluegrass bands. Beautiful song.