Jack Kerouac's The Dharma Bums Chapter 5 in one sentence 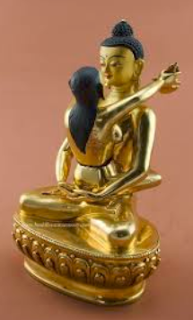 Your assignment for today was to read Chapter 5 of The Dharma Bums and summarize it in one sentence. Below is my one-sentence summary -- post yours as a comment. I'd also love to see general comments about the chapter, or questions.


The Dharma Bums Chapter 5 in one sentence:


Ray tells about how previously, at Japhy's shack, a girl had shown up and asked to climb the Matterhorn with them, to which Japhy replied, "shore, come on with us and we'll all screw ya at ten thousand feet," the same spirit in which he now brings the girl, Princess, to Ray's and Alvah's cottage to demonstrate "yabyum" [Google it], which turns into a threesome and Japhy announces they'll do this every Thursday -- Princess says, "Yeah" and that she's a Bodhisattva, impressing Ray -- so Japhy explains sex in Oriental religion and then leaves with Princess, resulting in Ray declaring Japhy the "great new hero of American culture," after which Ray and Alvah argue about Buddhism and Ray prays that God, or Tathagata, will help him tell people what he knows so they won't despair so much.


Your next assignment is to read The Dharma Bums Chapter 6 and post a one-sentence summary.
Posted by Rick Dale, author of The Beat Handbook at 9:21 AM