Jack Kerouac's The Dharma Bums Chapter 9 in one sentence 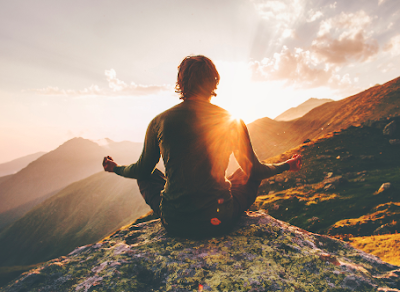 Your assignment for today was to read Chapter 9 of The Dharma Bums and summarize it in one sentence. Below is my one-sentence summary -- post yours as a comment. I'd also love to see general comments about the chapter, or questions.

The Dharma Bums Chapter 9 in one sentence:


Ray and Japhy climb on, reaching a meadow with a pond, following "ducks" (cairns), eyeing the plateau above them that was their destination for the night (no crowds there like potentially in the meadow), then it's all jumping from boulder to boulder, and Japhy says the secret is "'like Zen. Don't think. Just dance along,'" and they talk less as they tire, Japhy goes on ahead without his pack to find the camp site, he returns for Ray and it takes an hour climb to the 30-foot square "huge gray rock" they camp next to, they drink Japhy's tea, Ray tells Japhy a prayer he says and Japhy writes it down in his notebook, they worry about Morley but finally hear a distant "'Yodelayhee,'" then they meditate on a promontory overlooking the whole valley listening to Morley's yodels, it gets dark and Japhy supposes Morley will have the sense to pitch camp for the night so they head back to cook supper, and it turns out Morley does just that, sleeping in his two blankets on his air mattress in the meadow far below them.


Your next assignment is to read The Dharma Bums Chapter 10 and post a one-sentence summary. We're close to 1/3 of the way to the finish (Chapter 34)!
Posted by Rick Dale, author of The Beat Handbook at 10:50 AM