Day 19 Kerouaction: On Food for the Road

A few days ago we discussed the first in what will be several entries (at least 6) on the "beat diet." If you want to eat beat, you need to eat what Jack's characters ate. On August 11 we discussed the blissful breakfast food, slumgullion. Today's entry in The Beat Handbook: 100 Days of Kerouactions concerns "food for the road." That is, when you're on the move - whether hitchhiking (the best choice) or driving - what should you throw in your rucksack for sustenance along the way? According to the below passage from The Dharma Bums, the answer is Ry-Krisp crackers (yup, they still make them), a wedge of good sharp Cheddar cheese, and a roll of salami. 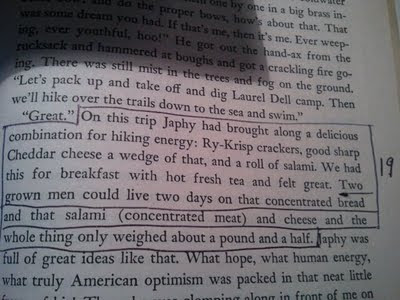 I know what you're thinking: this stuff should be kept in a cooler of some sort, especially the salami. Wrong! We all know you can keep cheese unrefrigerated, and the crackers are a no-brainer. But what about the salami? Well, two points here. First, Jack didn't refrigerate his, and it didn't kill him. Second, note this article on Salon.com, which explains which foods need to refrigerated and why. Salami has low moisture and it's cured, so it's safe to keep unrefrigerated.

That's my story and I'm sticking to it. Ry-Krisps, Cheddar cheese, salami. Throw that in your rucksack and go go go!

Posted by Rick Dale, author of The Beat Handbook at 8:46 AM