Day 8 in The Beat Handbook is titled, "On Watching Television." It references the below passage from The Dharma Bums. 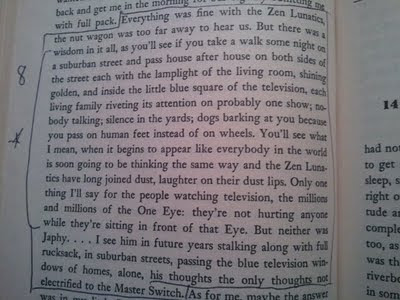 Indeed, I watch entirely too much television, despite my agreement with Jack that disconnecting from the "Master Switch" is important. But, as I say in my book, this is about you, not me. If Jack's plea resonates, do something about it. If not, don't.

It's up to you.
Posted by Rick Dale, author of The Beat Handbook at 9:07 AM