Day 11 in The Beat Handbook is titled, "On Compassion." It is based on the below passage from The Dharma Bums. 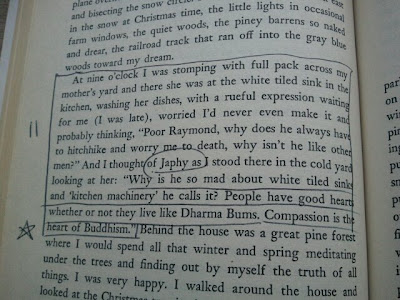 Compassion is the heart of Buddhism.

That pretty much sums it up. We're all cut from the same mold, full of hopes and dreams and fears and insecurities. Let's have compassion for each other. Step back before you go judging someone. Maybe that guy you're about to curse at for cutting you off on the highway is taking his mother to the ER because she has chest pains, and courteous driving isn't a high priority at that moment. You never know. And if someone wants to live a life centered around "white kitchen machinery," who are you to judge?

My administrative assistant refused to maximize windows when we were working together on her PC. I showed her how to do it, and explained how it was much more efficient than constantly scrolling up and down. She explained that she doesn't like to "see all that extra stuff" on the screen. I said it was up to her, and that now that she knew she had a choice, it was hers to make. That is, now it was an informed decision. And now sometimes she does it, and sometimes she doesn't, and I need to respect her choices because she gets the task done.

We don't always know whether someone's decision is informed. Herbert Simon, guru of public administration, said all managers are constrained in decision-making by "bounded rationality." They can never know all of the possible information needed to make a decision, so they gather what data they can and make the best decision possible under the circumstances.

I think people are like that. They make the best decisions they can under their unique circumstances, the latter being something we cannot possible fathom (let alone for ourselves!). So when someone is making decisions with which you disagree, maybe it will help to be compassionate if you remember that they "have good hearts whether or not they live like Dharma Bums," and they are doing the best they can. Sometimes, maybe all they need is for someone to hear them, to show them some empathy (compassion), which can lead to a new understanding, and sometimes to a "teachable moment," for one or both of you.

Synchronicity side note: As I was re-reading this passage from Bums, I noticed that two paragraphs above it on the the same page Jack mentioned Big Easonburg Woods. I'm currently reading a passage from Book of Sketches each night, and yesterday's was titled. "SOUNDS IN THE WOODS." It concludes thusly:

Written in Easonburg
woods, at one point naked,
Sunday, Aug 10 1952
--The Sounds of the Woods

Most of Jack's works are inter-referential. He wrote life, he wrote what he knew, and he was always writing writing writing. Cross-fertilization was inevitable (and intentional). It's great to happen upon an example without looking for it. At least I think so. Maybe it's just me.
Posted by Rick Dale, author of The Beat Handbook at 8:16 AM