Day 26 in The Beat Handbook: 100 Days of Kerouactions is titled. "On Enthusiasm", and references the below passage from On The Road. 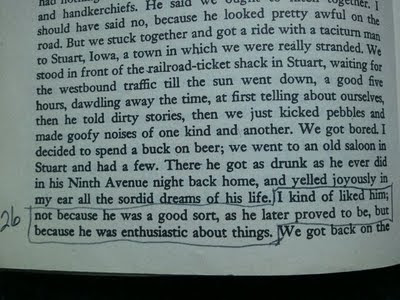 This passage is about a fellow hitchhiker (see yesterday's post) that Jack (Sal) starts hitching with in Des Moines. Right away, Jack realizes he likes him because he is someone who is mad to live.

I am convinced that Jack's affinity for such characters is one of his traits that made him such a great writer. He hung out with people who gave him something interesting to write about. In "How to write like Jack Kerouac," I expanded on this notion.* If you're going to write fiction, unless you have an amazing and vivid imagination (like George R.R. Martin, for example), you have to amass experiences to write about. Go places. Talk to people. Participate in events. Put yourself out there and see if that doesn't give you something worth writing about.

Here's some advice from Sylvia Plath which puts a different spin on my point:

And by the way, everything in life is writable about if you have the outgoing guts to do it, and the imagination to improvise.


Jack wrote his life. That practice, combined with an incredible memory and jazz-like improvisational skills, yielded this great American novel.

Tomorrow: On the "beat" character.

Posted by Rick Dale, author of The Beat Handbook at 8:56 AM