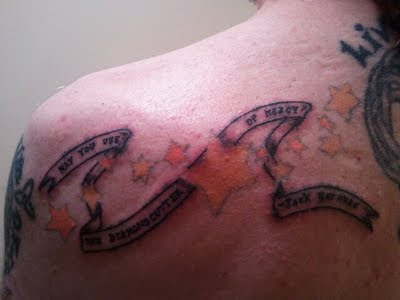 I don't know what took me so long to get a Kerouac tattoo, given my obsession with Jack and the beats, but here it is, courtesy today of Kathy Healey of Sinful Addictions in Hallowell, Maine. I think you can read what it says, but in case you can't, it's what Jack wrote on a thumbnail-sized piece of paper and gave to Japhy when the two parted at the end of The Dharma Bums. It relates to the Diamond Cutter Sutra, a sacred Buddhist text that Jack studied, and says:

MAY YOU USE THE DIAMONDCUTTER OF MERCY

It's capitalized in the book, so I went for authenticity.

I wanted a Kerouac quote as a tattoo, and I resonated with this one, in part because it's not an overused Kerouac quote (indeed, if you Google it, you'll find little), and in part because it advocates compassion using a paradoxical image. What takes me so long to get tattoos (this was my sixth visit) is that I stew on the idea until one strikes me. In this case, I was sure about the quote a while ago, but then I had to stew on where to put it. The idea of the banner woven through the existing Little Prince stars came to me, and I was ready to visit Kathy. The typewriter font was a no-brainer.

You've likely seen the below tattoo of Jack and the lengthy quote from On The Road that takes up a person's entire back. Pretty cool, but too much pain and expense for me. And it's a bit much. 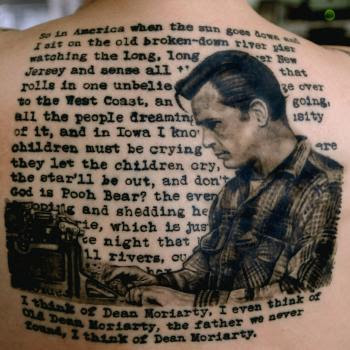 I wouldn't mind getting "mad to live" tattooed somewhere (not an original idea - I saw it on Google). It's a great abbreviation of the famous On The Road quote that starts, "The only people for me are the mad ones...."

Now it's A&D Ointment twice a day for a week or two until it's healed. Then I need to get the outlines of the stars darkened.

Some unsolicited advice: Tattoos are addictive. It's hard to stop once you start. And you're pretty much stuck with it, so be sure before the needle hits skin.

Do they hurt? Yes, a little. But it's more annoying than painful. Of course, I've never done a real sensitive part of my body (yet).
Posted by Rick Dale, author of The Beat Handbook at 10:06 PM

Email ThisBlogThis!Share to TwitterShare to FacebookShare to Pinterest
Labels: tattoo

what specific typewriter font is the second tattoo? I'm also looking to get a kerouac inspired tattoo and ive been looking for a good typewriter font

It's called Rough Typewriter and you can get it here: http://www.dafont.com/rough-typewriter.font

thanks! i love both of your tattoos, by the way. I'm hoping to get "but we lean forward to the next crazy venture beneath the skies" inked on my back as a 20th birthday present to myself :) thanks again for the font link!

You're welcome. Send me a picture when you get it done and I'll feature it here on The Daily Beat.