Day 21 in The Beat Handbook: 100 Days of Kerouactions is titled, "On Impermanence." It references the below passage from The Dharma Bums. 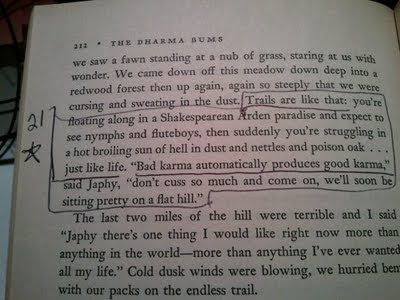 For me, the essence of this passage is a central teaching in Buddhism: the law of impermanence. It is an inescapable, eternal truth. Nothing lasts, neither good nor evil. Click here for a short treatise on the concept which includes the following:

Shoud [sic] we understand and recognize the Law of Impermanence, we could change our perspective toward life. We would admit life as it is, no matter what kind of change or adversity we encounter. That is the teaching of Buddha. We would be brave and wise in any circumstance, and more sympathetic to others. Never again would we cry when facing a mishap, an illness, or even death.

In The Matrix, the Oracle tells Neo: "Everything that has a beginning has an end." That goes for the good stuff and the bad stuff in your life. Knowing this, we can fully appreciate the good stuff while it's happening, and bear the bad stuff because we know it will end.

My mom always said, "This too shall pass." I think she usually said this about bad stuff, but it still sums up the law of impermanence pretty well.

Of course, the concepts of "good" and "bad" emanate from judgments we ourselves make, and if we would simply observe without the "me" involved (see yesterday's post), we'd end conflict right at the source.

Some will say, "If Jack understood all this stuff, why did he end up a disillusioned, bitter alcoholic?" My retort: That says a lot more about the speaker of such a statement than it does about Jack. If you want to change the world, start by changing yourself. If you're going to wait until others are perfect, you'll wait for an eternity. Jack was pointing at the moon, but he wasn't the moon and never claimed to be. He gave us the terrible beauty of the world in his words, and for that, those of us who "get" him are eternally thankful.

Posted by Rick Dale, author of The Beat Handbook at 8:25 AM

"He gave us the terrible beauty of the world in his words, and for that, those of us who "get" him are eternally thankful." I love this and it completely fits my perspective of Jack as well. If anything he is the real image of ourselves, not perfect, never can be, fallible to the tenth degree. Jack explored his world and universe both in a spiritual way as well in a physical way. He shared his demons and saints openly. He was so real and so approachable and his love of jazz was a perfect match to his life in words. Jack was an open book to the world. Did this make him more vulnerable to the alcohol that finally claimed his life? Quite possibly, but in his lifetime his writings left behind those explorations for dreamers and poets to explore. Would of loved to have met him in person. I had the opportunity to hear his daughter speak as well as a close friend at Eckerd College Reading Festival in St. Pete, FL many years ago and it was neat to hear them speak about the Jack they knew, but I seriously doubt even his closest friends could tell you about the real Jack. He lived a short while in my hometown of Orlando and I would love to go see his house someday. Now I live in the town that he died in. I would love to visit his town in MA one day as well.

Thank you so much for your comment. It is very heartening to know someone reads my blog and appreciates it! I think you nailed it: Jack was so open to the world that it made him vulnerable to alcoholism. I definitely recommend getting to Lowell - I will be at Lowell Celebrates Kerouac this October and highly recommend it! You can easily meet people who knew Jack there. I want to visit the Florida places Jack lived. Did you read Kerouac in Florida: Where the Road Ends?

This goes back to one of my favorite concepts – that we are each a work in progress. Sometimes we change in ways that others see as improvements and other times it’s seen more as regressive. However, change is pretty much a constant.

Change is a constant, indeed. Whether we like it or not! I find that people tend to like change when they are instigating it, and not so much when they perceive it as being done "to" them.