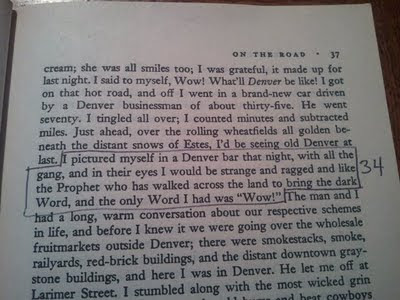 Jack Kerouac uses a variety of interjections in his work, some of which are not in the dictionary, making them "neologisms" (a word you can look up). In the above passage (discussed on Day 34 in The Beat Handbook: 100 Days of Kerouactions), Jack (Sal) has only one word for the situation: "Wow!" This is an interjection meaning "an exclamation of surprise, wonder, pleasure, or the like" (Dictionary.com).

However, he is also known to use "Yair!" This isn't in the dictionary, but in beat lingo it is used as an emphatic "Yes!" I suggest you start using it.

Another beat interjection that's not defined in the dictionary is "Yass." It's often used twice in a rows, as in "Yass! Yass!" I suggest you start using this word as well.*

What other beat interjections can you identify from Jack's works? If you find some, please let me know in a comment or via e-mail to thebeathandbook at gmail dot com. Include the source if it pleases.

* Note that neither yair nor yass are in The Beat Generation Dictionary which I salvaged from on-line extermination.

Tomorrow: On Parties.
Posted by Rick Dale, author of The Beat Handbook at 7:23 AM