Day 31 Kerouaction: On Finding Someone for the Night 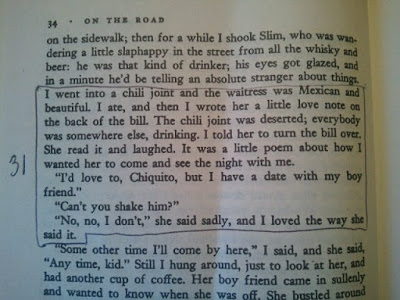 The above passage from On The Road is the subject of Day 31 in The Beat Handbook: 100 Days of Kerouactions.

In a nutshell, Jack is advocating the "direct approach" with the opposite sex (at least when seeking something more than a platonic relationship). In my book, I discuss meeting two street hustlers in New Orleans, Tommy and Todd, who showed me the possibilities of the direct approach taken to extremes. After watching their success on Bourbon Street a couple of nights in a row (outside The Snake Pit), I tried it at a pizza place on the way back to the hotel at about 2 AM (with a flight to catch at 8 AM). The waitress behind the pizza counter was quite comely, and, uncharacteristically, after ordering a slice, I said, "How come I've been in New Orleans for three days and never saw you before?" She gave me a big smile and said, "Because I've been in here working!" To my utter surprise, she proceeded to tell me when she got off work, and, sadly, I told her I had a flight to catch. In hindsight, I should have missed the flight.

My New Orleans experience showed me the benefit of the direct approach. Personally, I prefer a more subtle direct approach, such as Jack (Sal) models in the above passage. I left a waitress a note on the back of the bill one time, but chickened out and left before she came and collected it. It wasn't a poem, but said something about how beautiful she was. I like to think that at least I made her day. I went back a few days later to see if she was working, but no luck.

These days, I have a great romantic partner and have no need for the "direct approach," but it's definitely a Kerouaction if you're looking for someone for the night. Try it! Statistically, sooner or later it will work.

Posted by Rick Dale, author of The Beat Handbook at 4:00 AM

In Jack's day it was probably a lot safer to do the one night stand. These days you might bring home a lot more than you bargained for - in more ways that one. Think Fatal Attraction. 143!