Day 20's Kerouaction in The Beat Handbook: 100 Days of Kerouactions is titled, "On Walking Meditation." It references the below passage from The Dharma Bums. 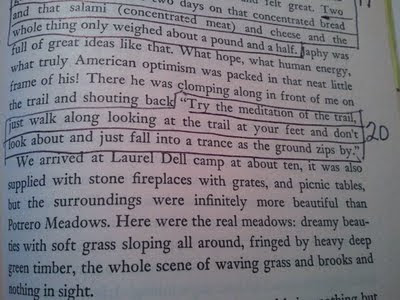 Many Westerners picture "meditation" as something you do sitting in a torturous cross-legged position on a special cushion (it's called a zafu, and if you really want to get comfy, you put the zafu atop a zabuton). On the contrary, meditation is a practice that is available 24/7, regardless of what you are doing. As Japhy points out, you can do it while hiking. Thich Nhat Hanh wrote an entire book on the subject, The Long Road to Joy: A Guide to Walking Meditation. If you Google "walking meditation," you'll get over 1.6 million hits.

I hope you will take the time to read this talk by Jiddu Krishnamurti in Santa Monica in 1974. In it, he says some powerful things about meditation. Among them:

Now here comes our difficulty. Because each one of you, I am quite sure have been corrupted - if I may use that word - by the recent fashion to meditate. The word 'meditation' means, by the dictionary, to ponder over, to consider, to go into, to explore. All that is involved in the word 'meditation' . And the gurus that have come from India with their traditional authority, with their technique, with their assertions, with their absurdities, and the Americans on the whole being rather gullible, have taken to it, paying lots of money and being fed up with the old church and old traditions, take on a new tradition of India and their mysteries and their absurdities. The word 'guru' in Sanskrit means one who resolves ignorance, takes away your ignorance. But generally the gurus impose their ignorance on you, their burden on you for so much money; or they assert they have got enlightenment. Some few years ago a very famous guru came to see us, with a few of his disciples. He was rather pompous, absolutely certain. And he said, 'I have got it, I am enlightened, I have reached, I have attained' - and we asked him what is it that he had attained. 'Oh,' he said, 'I have attained the immeasurable, it is in my heart, in my mind'. And we said, 'Can you hold the sea in your hand, can you hold the heavens in your fist, can you see the whole of the earth in observing one piece of the earth?' He was rather annoyed and left because he never wanted another to question what he had attained. So if you have gurus, and I hope you haven't, ask them what they have got, what their pretensions are. Truth is not something that you get, that you have, that you possess. It is a pathless land, nobody can lead you to it. You have to be a light to yourself from the very beginning so that you yourself stand alone, purified from all the absurdities of man's endeavour, search and explanations. And most of us like to depend on somebody and so the gurus are there to exploit people.


He says much more about meditation in this talk, and I truly think some time spent going into it with an open mind will yield new insights about meditation. It might even motivate you to read more of Krishnamurti's work. Or, perhaps you will watch one of the many videos on-line, such as this talk with Chogyam Trungpa Rinpoche, in which he says, "As long as you are held within a pattern, you must create disorder in the world."

If you watch the video and your mind is blown or confused, that's a good thing. It takes repeated exposure to Krishnamurti to "get" him.

Back to meditation. Go for a walk or a hike and see if you can leave yourself behind! Notice your breathing, feel your feet hitting the ground, smell the air, listen to the birds (or construction equipment or whatever sounds are happening), watch the scenery passing by - all without trying to make it be different from what it is ("I wish the birds were louder."), all without judgment ("Those bulldozers across the street are making too much noise."), all without the "me" involved. When thoughts occur (and they will), you'll know the "me" showed up, and that's okay. Just notice that and go back to experiencing the walk totally, observing everything about it without evaluation, analysis, and judgment.

But remember, you can meditate whenever you wish, whatever you are doing. Here's a great little video with some pointers, but keep in mind that Krishnamurti might call this a "method," and therefore it reinforces the "me." However, if you can get the hang of it by using the tips in this video, you can go beyond a "pattern" of meditation and thus meditate without all the trappings of process.

Namaste.
Posted by Rick Dale, author of The Beat Handbook at 9:17 AM

Email ThisBlogThis!Share to TwitterShare to FacebookShare to Pinterest
Labels: meditation, The Dharma Bums